Fir Island is the delta of the Skagit River and Wiley Slough is a small piece of it.  It is part of the huge complex of tidal marshes and wetlands where Fir Island borders Skagit Bay.  A system of dikes keeps the island from going underwater when the Skagit floods.  After 33 years in the area, I thought it was about time for a visit.  I was blown away by the beauty and magnificence of these wetlands.  I have never seen anything like them before. 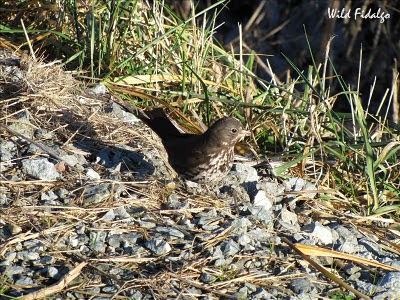 You can park at either the Fish and Wildlife headquarters or the boat launch and walk atop the dike.  The trek is about two miles/3.3 km until the path ends in marshes and muck.  Boots are needed to go further.  By far, the most numerous birds this day were the Fox Sparrows (Passerella iliaca).  It is not an exaggeration to estimate the numbers seen in the hundreds. 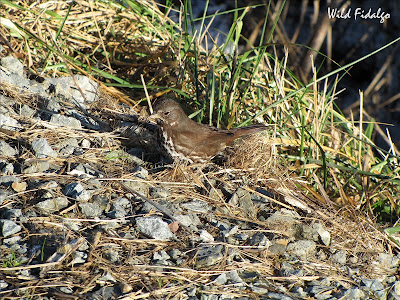 This fellow was working very hard, vigorously scratching and digging in the gravel.  I believe he was stirring up weed and grass seed.  He was completely absorbed in the task, unaffected by my presence.  Also seen were Spotted Towhees, Song Sparrows, Great Blue Herons, Ruby-crowned Kinglets, a Belted Kingfisher and a Bald Eagle.  One Owl, either a Great Horned or a Barred Owl was camouflaged in the branches of a tree.  There were also some very small ducks diving in a pond, but again, their identity was obscured by vegetation.  At one point, I heard the Snow Geese in the distance lifting off to move to another Fir Island field. 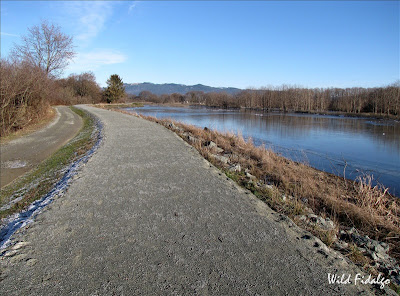 For a nature lover, this vast, magical wetland was a joy to behold.  Over the last few years, a restoration project has been underway to rehab the estuary wetlands and improve salmon habitat.  Hunters, bird watchers and hikers have all been considered in the plan.  The dike provides access deep into the marshes.  Normally, such a place would be inaccessible by foot. The natural river and tidal flows will recreate channels providing habitat for salmon and other aquatic species.  This is where the river's fresh water mixes with the salt water of the bay.  Young salmon smolts will spend up to three years in the brackish waters while their bodies become accustomed to living in the sea. 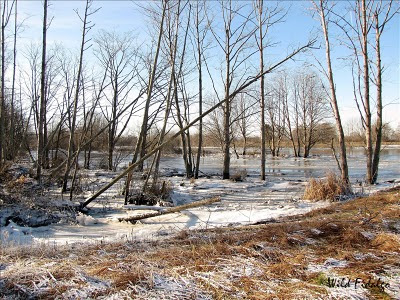 After several days of sub-freezing temperatures, ice had formed where the waters were still.  The water level had dropped since freezing and the temperature had warmed a bit.  Everywhere around me were the sounds of dropping chunks of ice, adding to the mystical experience.


A Paper Birch (Betula papyrifera) stands out among the Red Alders (Alnus rubra).  Someone thoughtfully put up a nest box out here.  It was more than a mile from the parking lot in the middle of nowhere.  Maybe it's not a nest box at all, but something else. 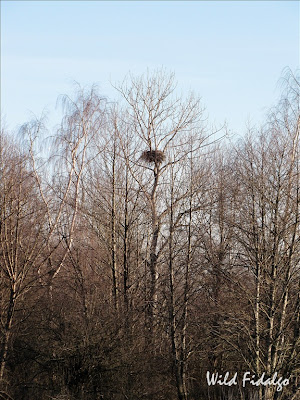 I spotted an Eagle's nest across the waterway, but in early January, nobody was home. 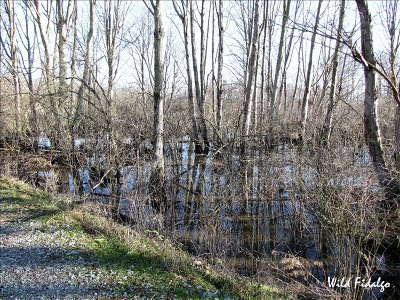 This is part of Wiley Slough near the spot where the Fox Sparrow was photographed.  This is also how a river was meant to enter a sea.  The flow of the great river is controlled when it divides into many small channels and ponds.  Pollutants and silt are filtered out by the marshes.  Untold numbers of wild species will make their homes here.  Now that I have discovered this amazing piece of creation, I plan to return many times. 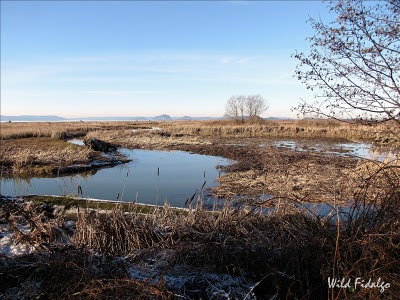