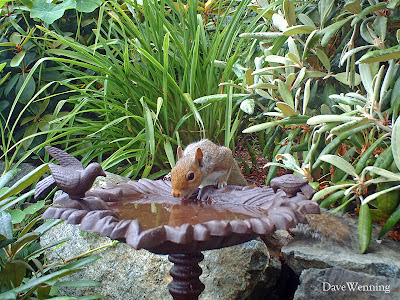 I thought I would try something different and use a birdbath as a BirdCam lure.  I got the idea from a recent post by David Lindquist at Cary BirdCam Blog.  I found a little birdbath on sale at Ace.  I thought it would look good in photos.  It also fit nicely within the depth-of-field setting on the BirdCam.

When I started reviewing photos, I was taken aback to find this Eastern Gray Squirrel showing up on the first day out.  As some may know, I have been engaged in something just short of hand-to-hand combat with these invasive and resolute feeder pests. 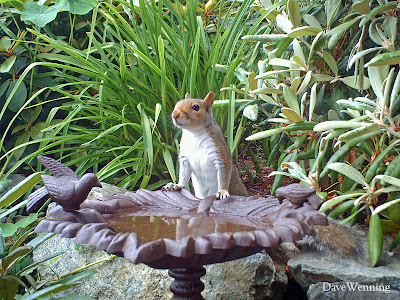 In the end, I would only get three squirrel shots, these two and one that was blurred.  What a relief.  This is in stark contrast to the 1,200 a day I was getting with a suet lure.  As long as he is behaving himself, he will be welcome to come for a drink now and then. 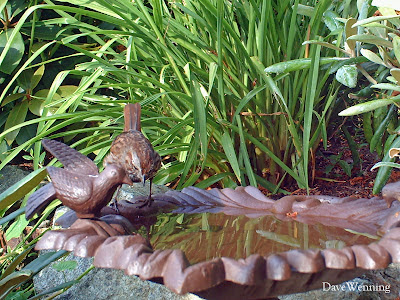 My very first customer was actually this Song Sparrow.  They have always been reliable BirdCam visitors.  The birdbath is positioned close to the front patio feeders offering a variety of fare, including black sunflower seed, pepper suet, safflower seed and nyjer.  These will attract birds to the vicinity and improve the chances of catching different species.

Some BirdCam tips:  When composing a BirdCam station, you want to create appealing photos.  Frame the shot with an attractive background that is natural and appropriate for your avian subjects.  While the birdbath is decorative, its drab color doesn't steal the show.  Pick a spot where there is good lighting for photos.  Also consider the angle of the shot.  This time, I aimed the camera slightly downward at the birdbath for a better view of the water surface.  Since I knew there might be some splashing, I positioned the camera further away than usual.  Here I am using the 24" - 37" depth of field setting.  Nothing ruins a shot like water drops on the lens.

You can move in closer to your subjects by cropping the photos.  Set the camera to the largest format (2048px x 1536px) to allow this.  For blog posts, I resize my BirdCam photos to 800 x 600 pixels.  I have described my BirdCam photo editing process in another post. 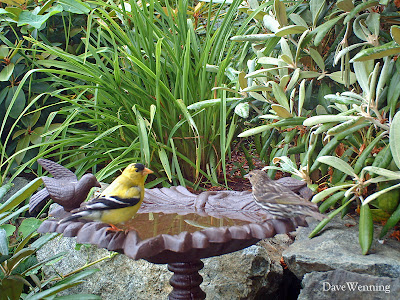 American Goldfinches and Pine Siskins are showing up on a regular basis.  I am noticing the same pattern I see at the koi pond.  Particular species come to drink in groups at different times of the day. 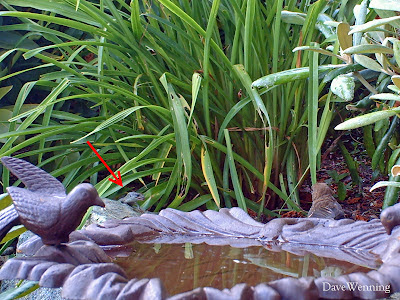 What a surprise to catch a photo of a lizard.  I have never seen one of these reclusive creatures in the yard before.  Since we only have one around here that I know of, I will ID him as a Northern Alligator Lizard.  He must have found a suitable home in the stone retaining wall behind the birdbath.  His companion looks like a juvenile Spotted Towhee.  The reptile looks ready to take him on, but he is lucky it wasn't a crow or a gull.  I think he would have been dinner. 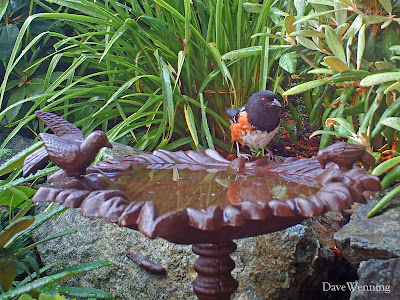 This morning, the BirdCam caught one of my favorites, a Spotted Towhee.  This is our largest, most beautiful sparrow and a year-around resident.  Remember that their eyes are really red.  That is not a camera artifact.  It's been raining cats and dogs and slugs today.  Can you spot the European Red Slug in the photo?

After just a couple of days, I have had some good results with this BirdCam setup.  I think the water feature is providing some nice photos.  It also illustrates the importance of providing water in the wildlife garden.  Like the watering holes of Africa, I am already seeing a variety of creatures.  I hope to catch birds that don't normally attend the feeders.  In particular, I want to get a photo of a Varied Thrush, and that is now my quest.  They do come regularly to the koi pond to bathe and drink, so maybe the birdbath will also attract them.