Sunday in the Yard with George 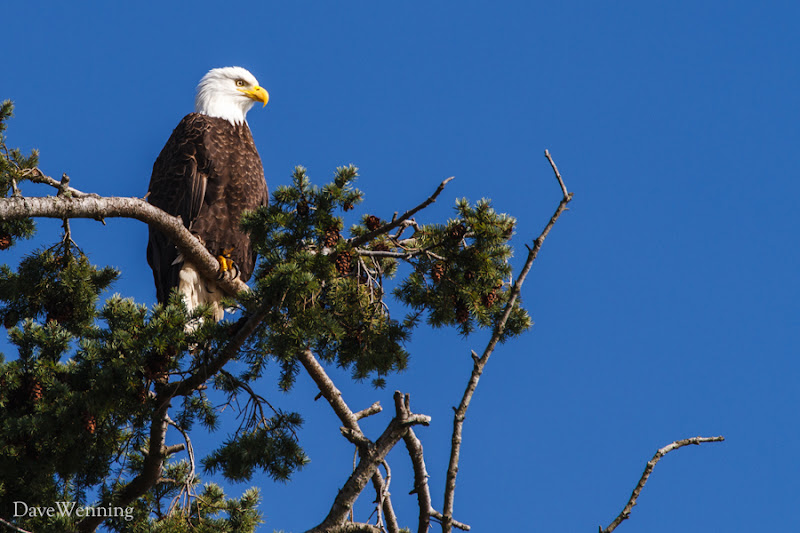 This is George.  He stops by my yard almost every day.  Usually Martha comes with him this time of the year, but not today. I always know when they are around.  Their chattering calls announce their arrivals.  This is courtship season, so I expect there will be a lot of chattering in the coming days.  It's usually a noisy affair.  I can tell this is George, because he is not as big as Martha.

Bald Eagles (Haliaeetus leucocephalus) are monogamous and tend to remain paired for life according to Seattle Audubon.  I have been fortunate to witness their tumbling courtship displays over Skagit Bay.  The pair will fly high above the water circling each other and chattering.  Then they grasp each other by the feet and tumble towards the bay like skaters in a death spiral.  They release just before hitting the water and swoop off in opposite directions to prepare to do it all over again.  They look like they are having a lot of fun.  I have also witnessed them in flagrante delicto in the trees outside my kitchen window.  Unlike their flight displays, this activity is very quiet.

I believe they nest across the bay on Skagit Island.  After catching fish, this is where I see them heading.  I have also seen a nest on Kiket Island, but that one wasn't occupied at the time.  Eagles will maintain two or three nests in their territory and rotate between them year to year.  It is thought that leaving a nest unused for a season might clean it of parasites.  Usually two eggs are laid and they hatch in about 35 days.  The parents will tend to the offspring for about six months.

I am aware that some people disapprove giving human names to wildlife.  Personally, I don't see the harm.  I will continue to enjoy those moments when George and Martha come to visit.
Hawks and Eagles
Location: Gibralter Road, Anacortes, WA 98221 USA