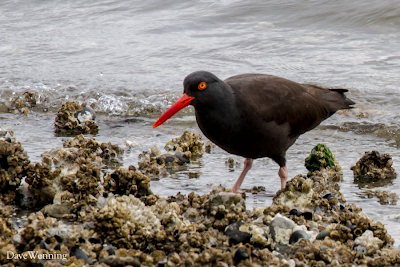 This past weekend, I decided to trek closer to home and check out my own beach.  It was a good decision, because I hit the wildlife jackpot.  I headed northeast into Similk Bay.  There wasn't much to see for the first half mile or so.  Even Mount Baker was dressed demurely in an early spring haze.

Then I spotted a pair of Black Oystercatchers (Haematopus bachmani), one of the rarer Washington state shorebirds.  They were busy foraging along the water's edge and appeared oblivious to my presence.  According to Birdweb, the state is host to only about 400 of these birds.

Today's breakfast was Nuttall's Cockle (Clinocardium nuttalli).  The Oystercatcher's bill is a specialized tool for opening mussels and clam shells.  The job still required effort to get the shell open.  This included some interesting foot action.  The reward was a delicious shellfish meal. 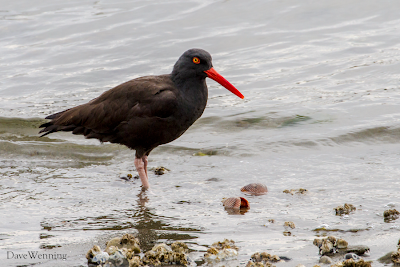 Rocky shorelines are the favorite habitat.  They are found along the Pacific coast from Alaska to Baja California.  One population estimate numbers fewer than 11,000 of these birds over their entire range.  Based on this relative lack of abundance, the Audubon Society has designated the Black Oystercatcher a "Species of High Concern."  This area of northern Puget Sound is one of the few spots where they are found inland from the Pacific Ocean. 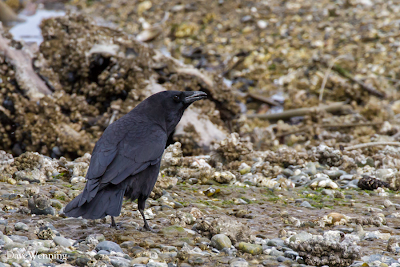 Several Northwestern Crows (Corvus caurinus) had joined the Oystercatchers on the beach.  Like the Black Oystercatcher, these beachcombing Corvids make their living in and around the intertidal zone.  This fellow seemed to have a lot to say and was not a bit shy about sharing it.


Gulls were also foraging in the quiet waters of Similk Bay.  Gulls can be tricky to identify, but I think these are Western Gulls (Larus occidentalis).  Please let me know if I am wrong. 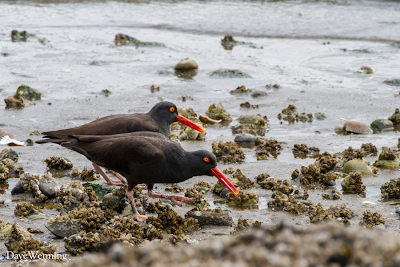 As I continued along the beach, I encountered a second pair of Black Oystercatchers.  This is the same area I spotted a single bird more than twenty years ago.  I had not seen any here since.  To spot two pairs in the same outing was remarkable and a very special treat.

This pair demonstrated their courtship song and dance for me.  It consisted of strutting, posturing and a high-pitched whistling song.  I actually heard the birds before I saw them.  In the mottled patterns of a rocky beach, they are surprisingly difficult to spot. 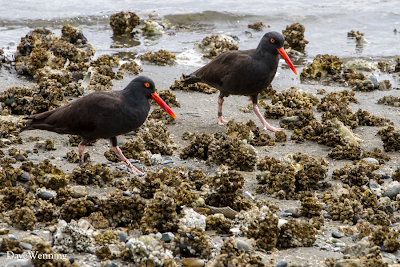 I had to step around some fallen trees to pass by the birds.  This brought me within about 15 feet/5 meters from them.  I did not want to disturb them and moved carefully.  Again, they seemed unconcerned and continued with their courtship rituals.  I noticed this same laid-back demeanor on previous encounters.

I discovered another interesting feature about this pair.  Click on the photos to enlarge them and notice that both birds are banded.  Each has a metal band on the right leg.  One has a red band with white letters "UB" on the left leg.  I did a search, but could not find any specific information about these bands.  I wondered if the UBC (University of British Columbia) was involved.  I would appreciate hearing from anyone who knows about these bands.

Enlarging the photos, you will also notice their feet are not webbed.  Those feet are made for walking and apparently for opening shellfish.  These are shorebirds that fly and walk, but they never swim. 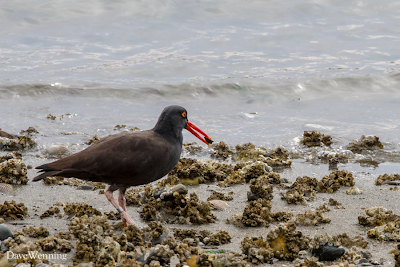 Pairs of Black Oystercatchers are monogamous and stay near their nesting area year around.  Chances are good that one of these pairs may be the same birds I have seen across the bay on Flagstaff Island.  I don't believe they nest here on South Fidalgo.  They prefer more isolated islands for nesting.

These are my favorite shore birds.  In my opinion, they are the most charming of all the birds I have met.  I felt privileged to find these two pairs so close to home and to witness some interesting behavior as well.  Now, to overcome the special challenges photographing black birds against bright backgrounds...