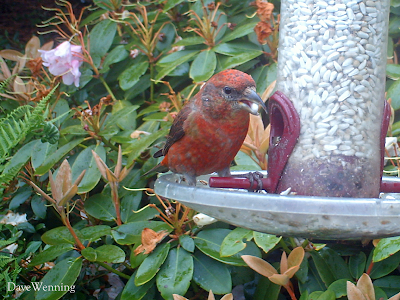 The Red Crossbill (Loxia curvirostra) was the bird that led me to bird watching.  I had recently moved into this house, and as I recall, it was late August.  The house was new and there was no yard yet.  I spotted a bright red bird with dark brown wings.  It was perched on an Alder snag and preening.  I had no idea what it was.  In the late afternoon sun, the red color was brilliant, almost glowing.  I tried to memorize everything I was seeing.  The important thing I could not see from a distance was that unique bill.

I bought my first bird book, a Peterson Field Guide to Western Birds, because of this sighting.  Using the book, I tentatively ID'd it as a Scarlet Tanager, but I had doubts.  It did indicate they were "accidental" in the Pacific Northwest.  The picture of a Red Crossbill in that book looked pink to me, and my bird was brick red, more like the Tanager. 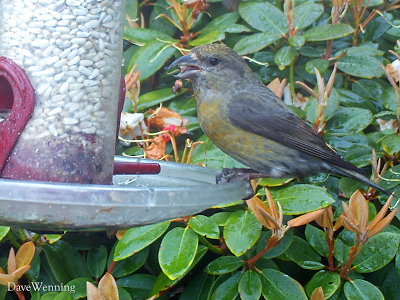 Now, move ahead in time about 12 years.  Add a bunch of feeders, a few more books, the internet, a little experience and a couple of BirdCams.  I got something interesting in a BirdCam photo that helped me ID the bird I had seen years before. 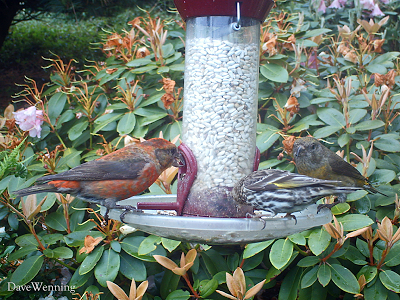 In this photo, a pair of Crossbills has been joined by a Pine Siskin at the BirdCam feeder.  One of the larger finches, mature male Red Crossbills display an orange-red color, while the females come in shades of olive green.  That crossed bill is a tool designed for removing conifer seeds from cones.  In this neighborhood that means Douglas and Grand Fir seeds.  Apparently, Safflower seeds from a feeder are also relished.  According to iBird, the size and shape of the bill will vary to accommodate local food sources.

The local food supply also determines the time of year for breeding.  Interestingly, Crossbills will even raise their young during the winter months if this is when the food supply is greatest.  The young are not born with crossed bills.  Instead, the mandibles cross as the chicks grow.  With so much governed by local food, would it be wrong to view this species as an example of evolution in action?

In this neighborhood, the upper bill always seems to cross over to the left side. Does anyone know if that characteristic holds true elsewhere?

My neighbor Dan who lives in The Heights behind me has been visited by several Red Crossbills and he sent me these photos.  These shots really catch that odd bill.  He has been seeing nearly a dozen or so at a time.  This is a remarkable experience.  Other than the occasional BirdCam photo, I have only seen that one bird in the yard years ago.  Nevertheless, our experiences indicate the local population might be increasing.

I was lucky to catch the Crossbills in the BirdCam.  At least 98% of the photos lately have been of House Finches.  The BirdCam has now been reset with Thistle Seed for American Goldfinches.  Here is a preview of coming attractions: 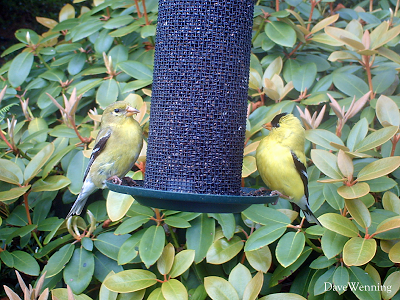