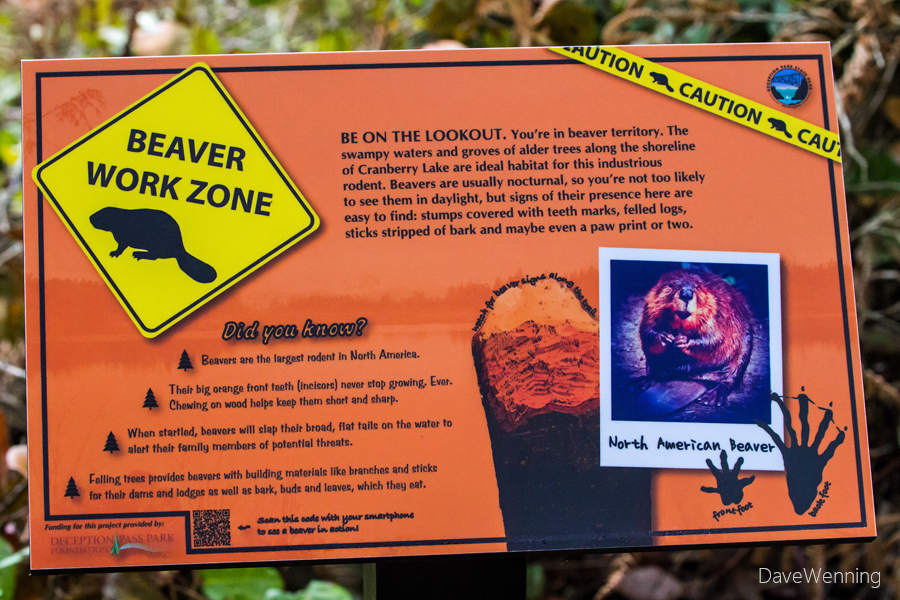 This morning I hiked the trail from East Cranberry Lake to West Beach in Deception Pass State Park.  It is a nice, easy, mostly level hike and a good way to spend a couple of hours in the middle of winter.  Despite the lakeside location, your feet will stay dry, which is always a must in my opinion.  Shortly after setting off, this marker indicated I was entering Beaver country.  The Beaver is North America's largest rodent, and the second-largest in the world after the Capybara.

I had never seen a beaver in the wild, unless you count the time when I was about eleven years old.  He was posing for pictures right in the middle of the bridge at Chief Joseph Dam in eastern Washington.  I am not kidding.  He mugged and posed and seemed to enjoy entertaining the tourists while they took his picture.  He would sit up on his hind legs and turn his profile to the cameras, first left, then right.  He was a big guy, more than two feet tall when he did this.  He acted more like someone's pet than a wild creature which is why I don't count it as a wildlife encounter.  (Remind me to tell you my Cougar story sometime.  That was a real encounter.) 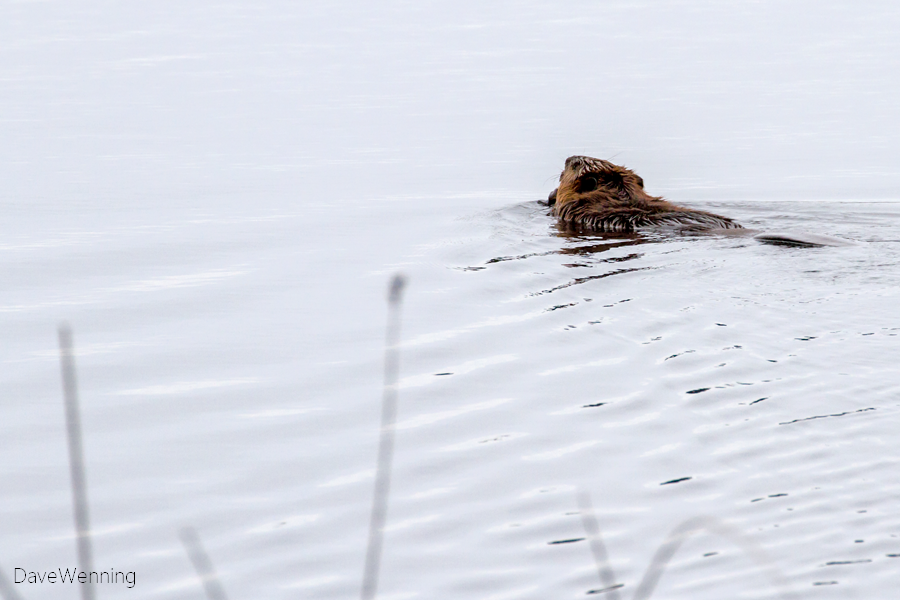 The trail skirts the lake shore, then crosses the road to continue along the edge of the West Beach campgrounds.  Near the crosswalk is a viewpoint at the shoreline where I spotted my first truly wild North American Beavers (Castor canadensis).  There were two of them in the water swimming away from me at an angle. 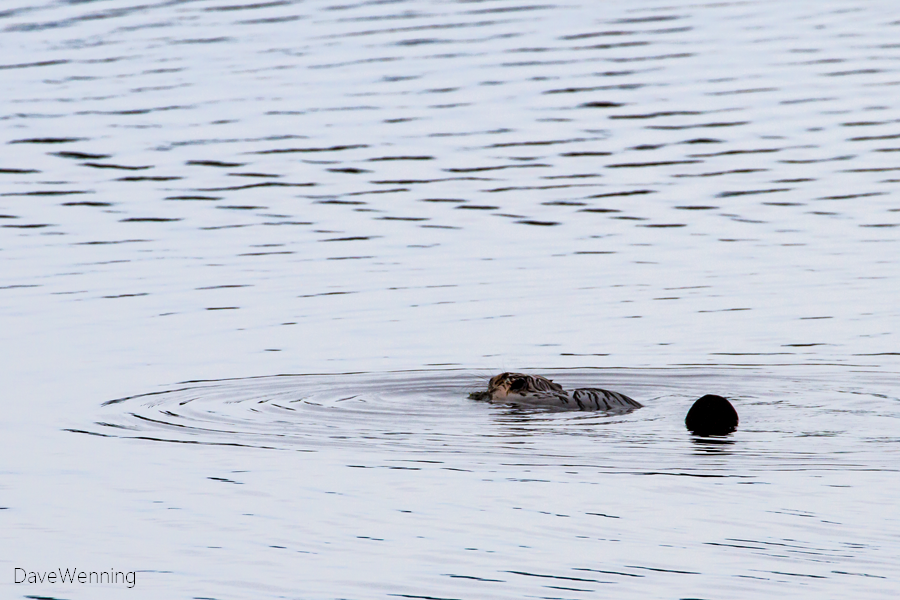 This is the second one.  That's the end of his flat tail sticking out of the water.  He froze in this position for a moment.  He may have become alerted by my presence.  From everything I have read, it is unusual to see these nocturnal creatures out and about in the daytime. 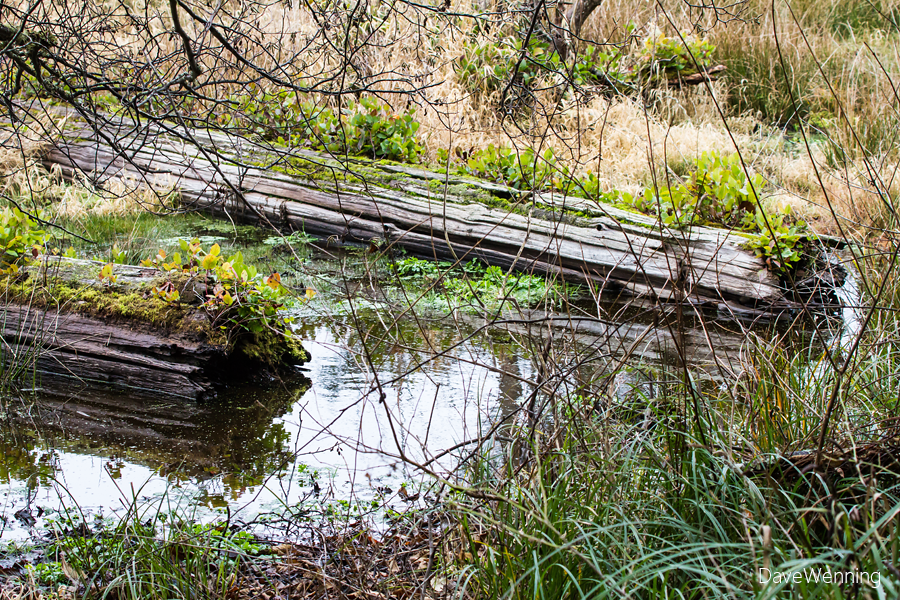 This is some of the Beavers' territory in the swampy areas along the edge of the lake.


There were obvious signs of Beaver activity along the trail.  Even if they don't seem to be around, it is easy to see where they have been working.  More Beaver activity was apparent next to the West Beach parking lot: 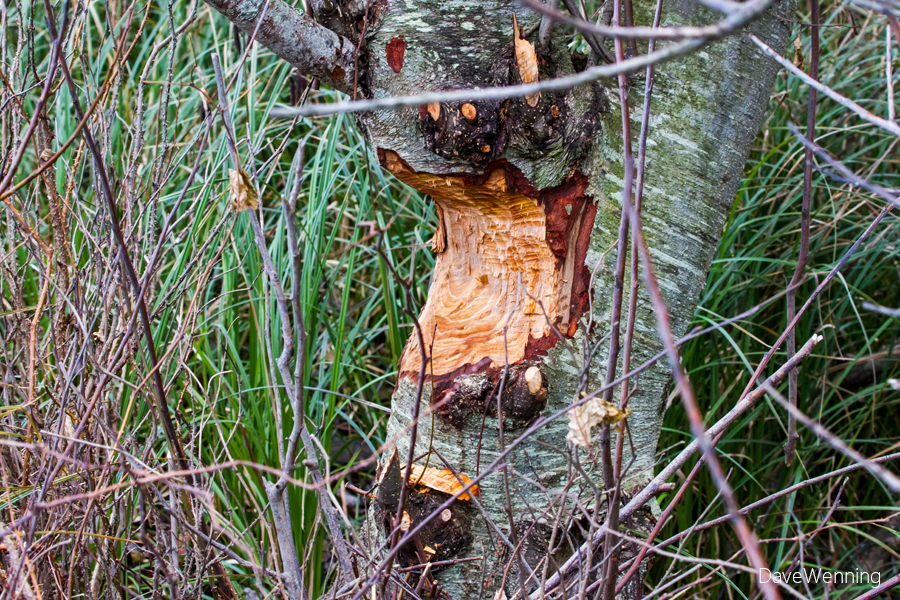 Are you aware of the significance of the word "beaver" in the English language? 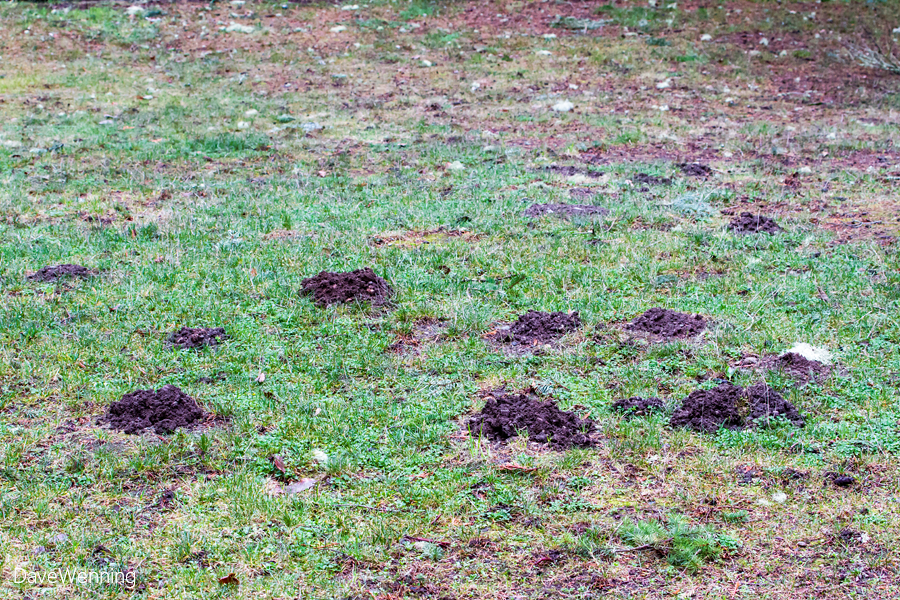 Not to be outdone, the works of another industrious and reclusive mammal were on display at the East Cranberry Lake picnic grounds.  Over the winter months, every gardener's favorite visitor is given free run of the state park.
Mammals
Location: Deception Pass State Park, WA , USA