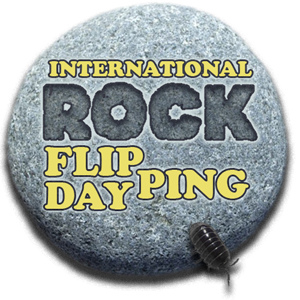 Yesterday was International Rock Flipping Day.  This has become an annual event to encourage people to get outside and explore the natural world.  Nature bloggers, in particular, go out to favorite spots to see what is going on under the rocks.  This is also meant for families to provide their children a little STEM-ulus to explore science in their own backyards and beyond.

My plan was to head to the beach at low tide for my first IRFD post.  While I waited for the tide to go out, I did some practice flipping in the garden:


It's been pretty dry here since June.  So far, it has only rained once this month and conditions in the garden are quite arid.  I didn't expect to find much.  Our ubiquitous Woodlice were nowhere to be found.  I did discover this beetle under a stone at the edge of a gravel path.  I had some problems identifying it.  Click or right-click the photo to see it full size.  Based on image searches, it could be one of the North American native Rove Beetles (Ocypus spp.).

It could also be the Devil's Coach-horse Beetle (Ocypus olens) which is an introduced species from Europe.  Both are beneficial garden insects feeding on other insects, Woodlice and even slugs.  I would appreciate hearing from anyone who knows for sure what this is.

Low tide was scheduled for 4:24 PM, so at 4:00 I headed to the beach.  The late afternoon September lighting would be difficult, but that's how it goes in nature.  The +5.2 foot/1.6 m low tide was not special, but it was low enough to expose the upper inter-tidal zone.  For the landlocked, a "zero tide" (0 feet/0 meters) is the average low water height.  Minus and plus tides are measured from that point. 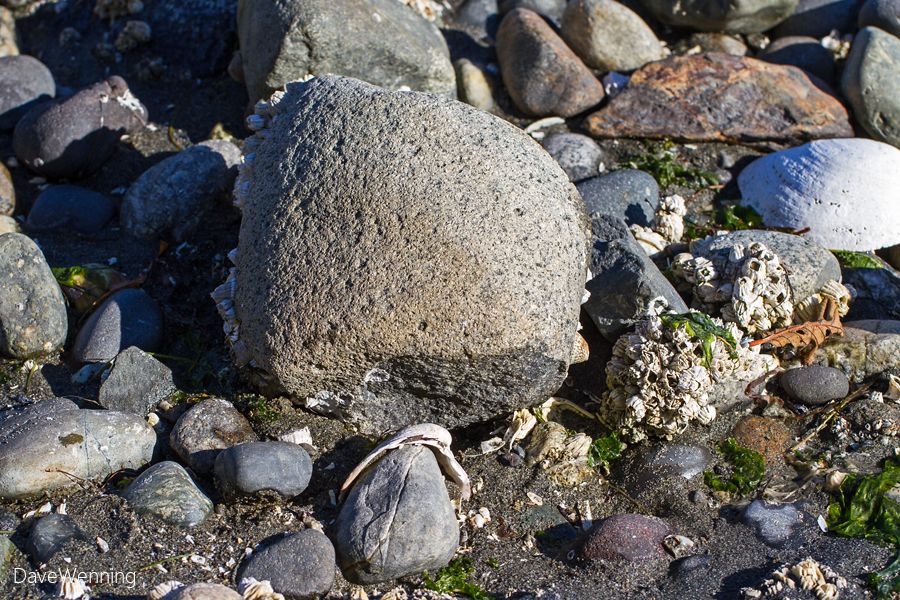 Now that looks like a good candidate.  I had a hunch what I would find: 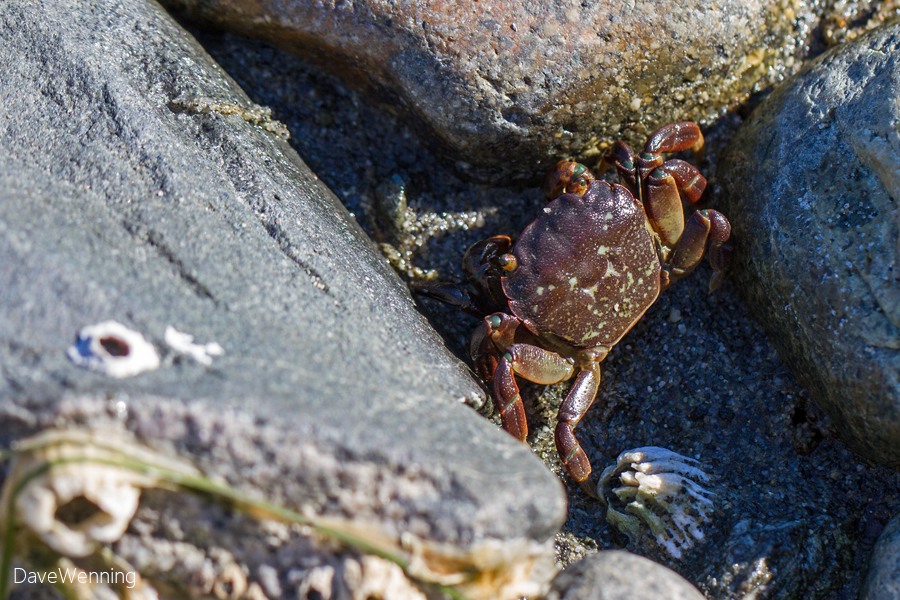 The Purple Shore Crab (Hemigrapsus nudus) is one of the most common crustaceans found on our rocky beaches.  My field guide describes them as "a feisty and aggressive little resident of the high and middle inter-tidal zone."  "Feisty" is a good description.  These are little guys, ranging in size from less than 0.5 up to 2.25 inches (1-6 cm).  But a diminutive size doesn't make them shy.  If you bother them, they will be more than willing to take you on.  They spend days hiding under rocks to escape being eaten by predators.  These include fish, diving birds and shore birds.  At night they emerge to feed on marine plant material.

There might be a couple dozen Purple Shore Crabs under an average-sized rock.  When their rock is upended, the first thing they do is scatter, lickety-split, in all directions.  I hope the neighbors didn't see me hopping around, squatting, taking pictures of the ground.  It wasn't very dignified.

The lower-left photo shows the classic defensive posture.  The little guy was ready to give me a good nip with those pincers.  This startled scattering and alarm behavior brings to mind one of the tenets of Rock Flipping Day:


“The animals we find under rocks are at home; they rest there, sleep there, raise their families there. Then we come along and take off the roof, so please remember to replace it carefully. Try not to squish the residents; move them aside if they’re big enough; they’ll run back as soon as their rock is back in place.”

When I finished shooting, I made sure my subjects were safely ensconced so as not to become seagull food.  That's a risk they endure without my help.  Another rock produced something quite different: 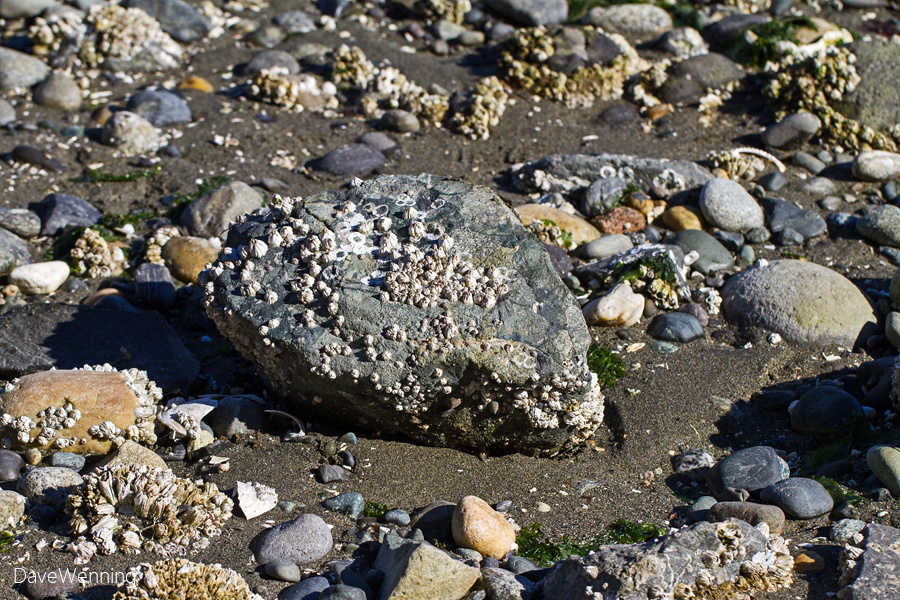 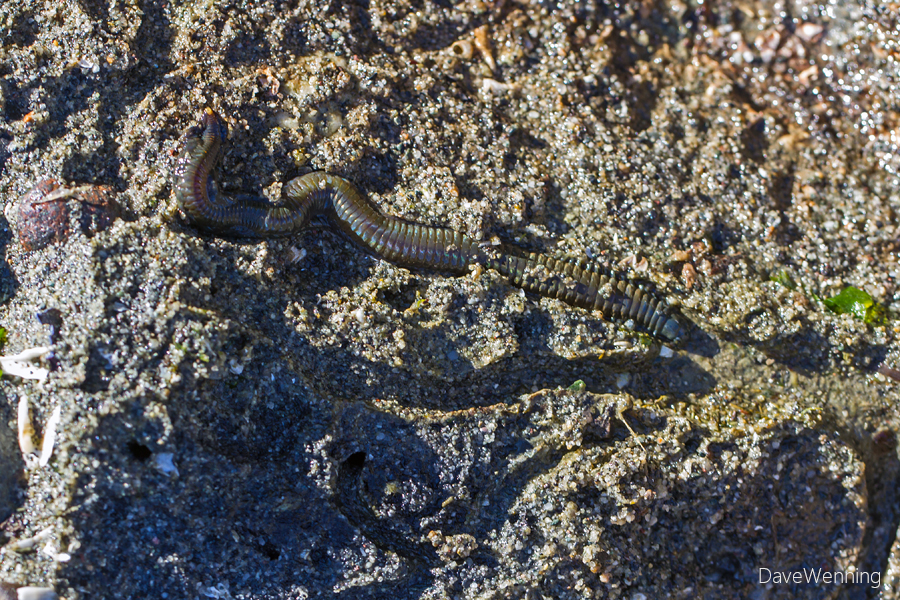 This rock was sitting in a sandy spot and underneath I found a Polychaete worm.  In the lower photo you can see the worm's burrows carved in the sand.  They are segmented worms belonging to the Annelids, the same phylum as earthworms.  Each segment bears a pair of appendages called parapodia meaning "not quite feet."  They seem to serve the purpose of locomotion well.  They're not as fast as the crabs, so it was easier to photograph in its original place.

There are about 10,000 species of Polychaetes, so I am not going to try narrowing the ID of this one down any further.  Some of the common names I found include Sand Worms, Bristle Worms, Pile Worms, Lug Worms and Clam Worms.

The class name Polychaeta means "many bristles."  Apparently each parapodium bears bristles, also assisting in locomotion.  Earthworms, on the other hand, are in the class Oligochaeta which means "few bristles."

My first International Rock Flipping Day is now completed.  I am already thinking about next year.  The beach is one of my favorite places to explore.  I am pleased I was able to reveal a few creatures close to my home.  Now, I wonder what I would find under this one: 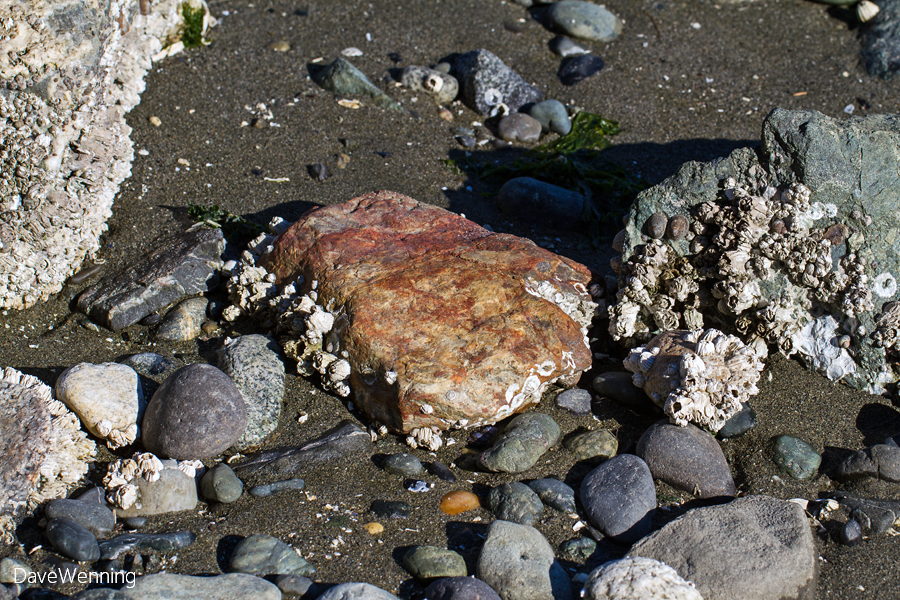