Got Him!  Belted Kingfisher 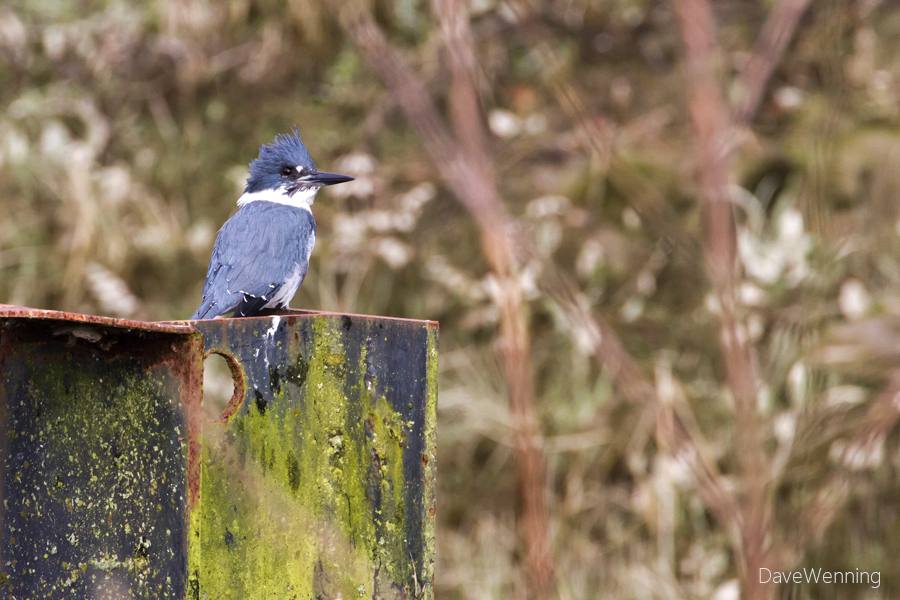 For three years, I have been gunning for this Belted Kingfisher (Megaceryle alcyon).  Such as it is, I finally got a photo this morning.  This is a male.  Females have a rust colored band across the belly.  The characteristic white spot in front of the eye is clearly visible.

They are fairly common here wherever there is fresh or salt water.  They can hover in place over the water much like a hummingbird.  When they spot prey near the surface, they dive straight down and snatch it in that long bill.  Their favorite food is fish, but they also like frogs, tadpoles, insects and crayfish.  I usually hear them before I see them.  Their noisy ratcheting calls resemble the sound of a fishing reel.  They love to make that noise when they are flying or hovering.

The species name alcyon is a variation of halcyon.  In Greek mythology, this was a kingfisher that calmed the winter sea to lay its eggs in a floating nest.  The myth led to the use of the word to mean peace and calmness.  In fact, Kingfishers actually nest in horizontal tunnels dug into sand banks.

This guy hangs out at Wiley Slough just outside the new barrier dike in the Skagit River Delta wetlands.  I have seen him often in this same area.  Today, he was perched on one of the tide gate uprights next to the dike.  They never let anyone get very close.  I got this photo just as he turned and spotted me.  One second later, he was gone in a flash.
Kingfishers
Location: Fir Island, Skagit County, WA, USA