Solitary pairs of Black Oystercatchers (Haematopus bachmani) nest on solitary islands above the high tide mark.  A simple scrape in the rocks is all they require.  Locally they can be found around the rocky shores of the San Juans, Whidbey and Fidalgo Islands.  Pairs are monogamous and return to the same nesting sites every year.

During the fall and winter, however, they give up their isolation and come together in flocks or "parcels."  One spot where this can be observed is at West Beach in Deception Pass State Park.  They can be seen mid to late mornings on the large rock just offshore from the parking lot.  I have unofficially dubbed this "Fraggle Rock." 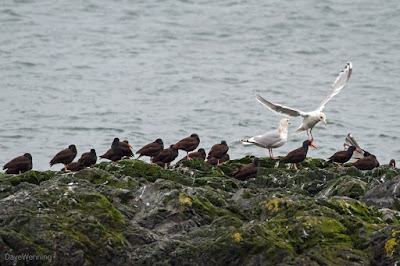 On my visit yesterday, I watched as more gulls flew in to join the party.  I have never witnessed squabbling between gulls and Oystercatchers.  Mixed groups always appear amicable. 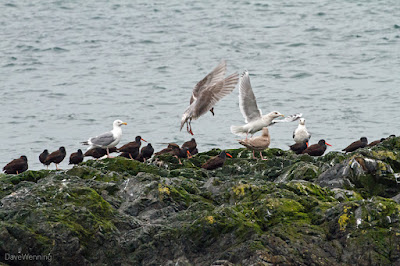 More gulls continued to fly in.  Peace continued, but it started to get too crowded for the Oystercatchers.  They began leaving, flying off the rock with their rapid, high-pitched calls.  They appeared to be heading over to Lighthouse Point across Deception Pass.  When I returned after my hike up the North Beach Trail, only gulls remained on the rock.  All the Oystercatchers were gone.