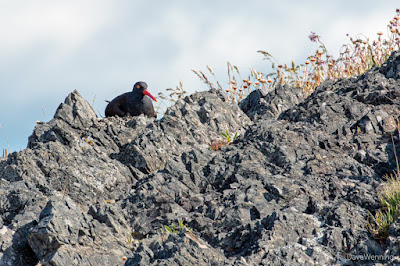 I consider the pair of Black Oystercatchers (Haematopus bachmani) that make their home in the Kukutali Preserve to be friends.  I have been watching them since 2011, the first time I visited.  I'm fairly certain I have been seeing the same birds every year.  According to Seattle Audubon, "Males and females appear to form long-term pair bonds, and the pair returns to the same territory year after year."

I was in the Preserve yesterday and found them in their usual spot, where they appear to be nesting now.  They seem to nest later in the season than other birds.  I'm not certain, but perhaps it's a shorebird thing.  Land birds are pretty much done with that now, or even getting ready for a second brood.  Oystercatchers lay their eggs in a simple scrape in the rocks, above the high tide line, according to the iBird app. 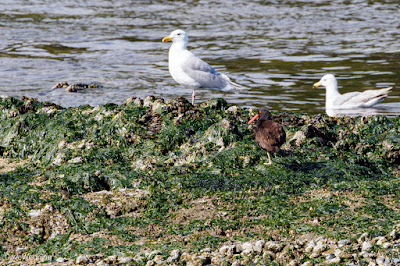 While I walked up the beach to the west, I pointed the camera at some gulls that were still quite a distance away.  Only then did I spot the Oystercatcher in their company through the telephoto lens.  At that distance, it was completely camouflaged in the dark tones of the beach.  After some preening, it flew up to towards Flagstaff Island out of my line of sight.

I continued walking up the beach to see if I could spot him around the end of the island.  Sure enough, both birds were up on the bank and the other one appeared to be sitting on a nest (first photo above). 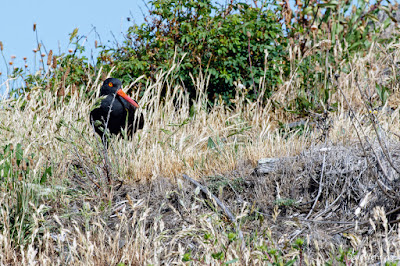 This is the first bird I spotted on the beach, now close to its mate.  Both parents take turns incubating the eggs.  To us, males and females look alike, so I can't say which of these is the male and which the female.

They showed no concern revealing their nest site to me.  I have noticed before how unfazed these birds are when I am around.  If you come here to visit them, however, don't misinterpret their laid-back nature as an invitation to approach.  Keep your distance.  Come only at low tide when you can steer clear of the nest site.  And of course, stay off of Flagstaff Island altogether.  I took these photos with a telephoto lens, and then cropped them to bring the images even closer. 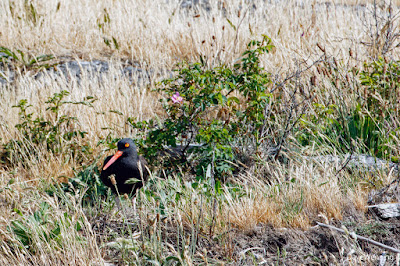 Oystercatchers like to nest on small, isolated, treeless islands with rocky beaches.  This isolation may explain why they don't flee in terror at the sight of a human.  They may have never developed the fear that mainland birds have.  We should not take undue advantage of this privilege.

The south beach of Flagstaff Island and its tombolo are open to hikers except during the months of August and September.  Motorized boats are not permitted to land on beaches.

As I continued watching, bird number one found a good spot to settle down and rest in the sun.  Again, notice how camouflaged it is in the shadow of a rose bush.  This bird and I both seemed to be agreeing, "life is good." 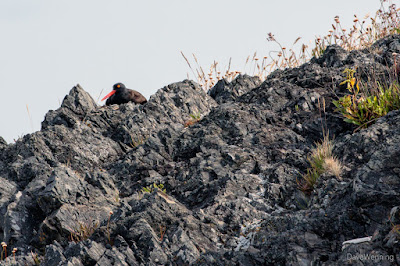 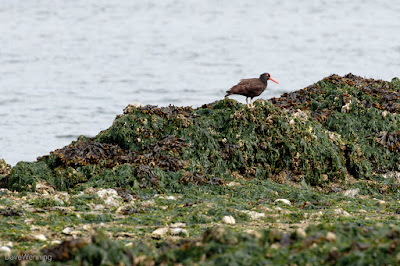 I was back on the beach off Flagstaff Island yesterday.  I found our happy couple again, one on nest duty and the other getting breakfast low on the beach.  Black Oystercatcher incubation lasts 24 to 29 days so I expect the chicks will hatch within the next 2 weeks.  Without a tele lens or binoculars, the brooding bird is invisible, just like another bump in the rock.
Behavior Kukutali Preserve Oystercatchers Shorebirds
Location: Kukutali Preserve, Kiket Island, WA, USA