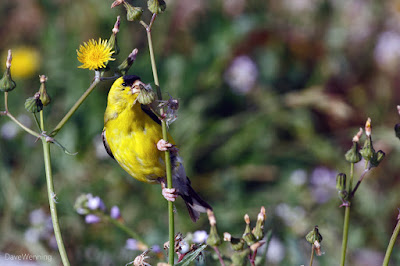 The American Goldfinch (Spinus tristis. a.k.a. Carduelis tristis) is the Washington State Bird.  I have been trying to get a decent photo of one for almost 10 years.  That makes this encounter yesterday in the Kukutali Preserve somewhat momentous for me.

These are wary, fast moving little birds that will flee at the sight of a human.  Up until now, I have only been able to observe them from afar or using the BirdCam.  This bird allowed me to stand within about 10 feet/3 meters while he took a meal of Hawksbeard seeds. 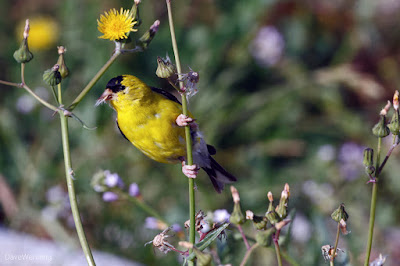 From these photos, notice how he never took his eye off of me.  If I had made one wrong move, he would have been gone in an instant.

This is a male, identified by his bright yellow breeding plumage and black cap.  Females are a duller olive brown color and lack the black cap.  In winter, both genders are olive brown.  I usually see them in small groups or "charms," but this bird was feeding alone. 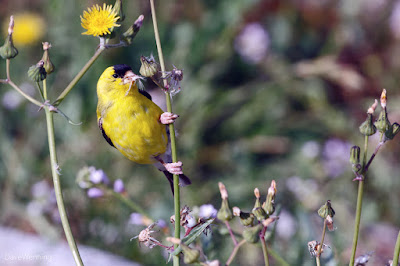 The State of Washington refers to it as the Willow Goldfinch.  This is apparently a name given to an American Goldfinch subspecies S. t. salicamens.

The American Goldfinch is also the state bird of Iowa, where I lived during the 1970's, and New Jersey.  In those states it may be called the Eastern Goldfinch.  Whatever name you choose, it is always a treat to spot these bright little finches. 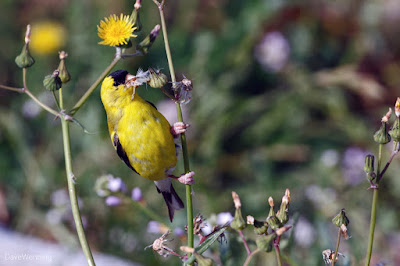 Thistle seed is a favorite food.  Since wild thistle seed won't be available here until later in the summer, this Hawksbeard seed will have to do.

Observant wildlife gardeners will take lessons from what is seen in nature.  Perhaps we should reconsider pulling these "weeds" in our gardens.  Letting them persist and go to seed might just be the ticket for attracting and getting close to Goldfinches.