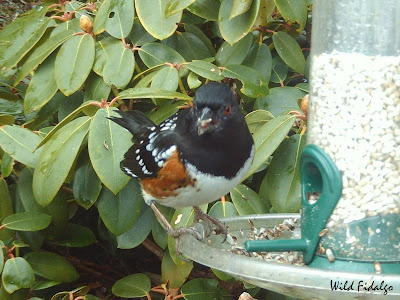 The previous post introduced an atypical Spotted Towhee (Pipilo maculatus) visiting the BirdCam station.  While the leopard may not be able to change its spots, the Spotted Towhee can.  Our local oregonus variants have relatively few spots.  Those to the east and south, including eastern Washington birds, are markedly spottier.  This bird appears to be one of those which has wandered into our area.

My attempt to identify this bird among the 21 listed subspecies was frustrating.  Based on descriptions I found, I took a guess that he was a montanus variant, and admitted it was a guess.  I noted that in Pacific NW Birder, Greg Gillson was also visited by such birds in Beaverton, Oregon.  He identified them as curtatus, or Nevada Towhees.  In a comment to my post, he has kindly provided more information:

"I think you are correct that this towhee with white outer tail feathers is one of the inland group. I wish we knew what one!

Going only by published ranges in "The A.O.U. Check-list of North American Birds" (1957, the last time subspecies were included), gives these three possibilities:

arcticus breeds north and east of Washington and could occur in winter (even though no records up to the last 20 years, anyway).

And montanus apparently gets no closer than central eastern California, so seems least likely to winter in NW Washington."

So there you have it.  I agree that based on this information our visitors are likely to be curtatus variants.  Sibley provides more information about the Spotted Towhee problem:

"Geographic variation in voice and plumage is complex and poorly understood.  There are two distinct call types but less distinct differences in song and plumage.  More study is needed.  Great Plains is palest, with most extensive white markings; Pacific Northwest is darkest.  Great Plains females are gray-brown; other females are very dark, similar to males."

In Towhees, rather subtle differences have defined separate species, Spotteds vs. Easterns.  The Spotteds are further broken down based on the character and number of spots.  Now consider the case of the Dark-eyed Junco (Junco hyemalis).  They exhibit large differences in colors, patterns and markings; regional variants don't look anything alike.  Yet these are all considered the same species.  Is it possible the Dark-eyed Junco needs a little more categorizing and the Spotted Towhee a little less?

Those of us who grew up with the likes of Marlin Perkins, Marty Stouffer, David Attenborough, Jacques Cousteau and David Suzuki have been endowed with a special curiosity about nature.  Making these little discoveries in our own backyards is a pleasure beyond description.  Lets hope the curiosity never leaves us.
BirdCam Towhees
Location: Fidalgo Island, Washington, USA