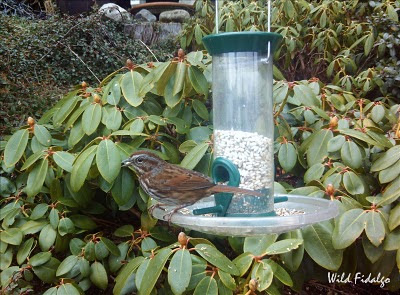 The Song Sparrow (Melospiza melodia) is one of our year-around residents on South Fidalgo.  They are identified by a gray and brown striped face, buff malar stripe, light chin and a light median stripe over the crown of the head.  The local Pacific Northwest morphna race tends to be darker and redder than in other locations.  Don't confuse them with Fox Sparrows which have solid brown heads and backs with a bit of shading, but no stripes.  Savannah and Lincoln's Sparrows are smaller and paler. 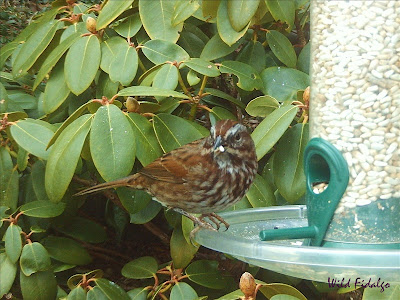 Song Sparrows are among the most frequently seen birds at the feeders.  These ground foragers are not fussy eaters, relishing black sunflower, suet and safflower seed.  In coastal areas, they also eat shellfish.  They will come to feeders where there is some cover nearby.  Their preferred habitat is forest edges, thickets and marshes with open grassy feeding areas.  This includes the undergrowth of gardens and city parks according to iBird.  Their edge habitat has actually increased due to logging and suburban sprawl.  At one time or another, they can be seen almost everywhere in North America. 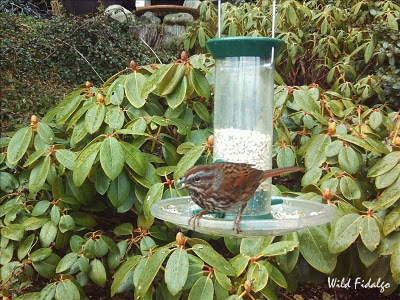 I can always count on a couple of Song Sparrow nests deep inside of my Tanyosho Pines.  True to their name, they have a complex, melodic song that other birds have trouble imitating.  iBird describes it as "Madge-Madge-Madge, put-on-your-tea-kettle-ettle-ettle."  Appropriately, a group of Song Sparrows is called a "choir" or "chorus."
BirdCam Sparrows
Location: Fidalgo Island, Washington, USA