July 03, 2011
The most charming shorebird in the Pacific Northwest is the Black Oystercatcher (Haematopus bachmani).  Don't expect frequent encounters, however, as they are quite rare.  If you spot one, consider it a privilege.  Although not classed as endangered, it is estimated that only 10,000 to 12,000 birds inhabit their entire range.  Because of these low numbers, they are listed as a "species of high concern" according to Audubon.  Their range is extensive, the outer North American coast from the Aleutians to Baja California and the inland Salish Sea as far south as Whidbey Island. 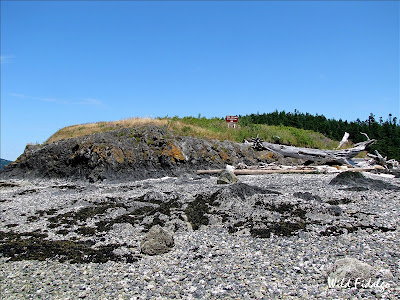 This is tiny Flagstaff Island, part of the Kukutali Preserve and Deception Pass State Park.  It sits in Skagit Bay offshore from my home.  Rocky headlands with gravel beaches on isolated, non-forested islands describes the preferred habitat of the Oystercatcher.  At low tide they will forage for shellfish, especially limpets and mussels.  They nest in simple hollows scraped on ledges or in grass above the high tide line.

Kukutali is a restricted area with escorted visits available by reservation only.  Visitors are not allowed to trek onto Flagstaff Island at all. 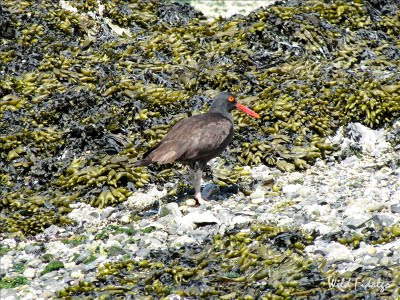 Black Oystercatchers are about the size of a crow.  They are all black or dark brown, with a distinctive red-orange bill and pink legs.  The unique, bright yellow eye is set off with a contrasting orange eye ring.  When all put together, they are a bit like a cartoon bird, but don't take them for granted.  When they sit still on the beach, they are very difficult to spot.  They blend right in with patches of Rockweed.  This is the brown seaweed seen all over the beaches here.  That heavy bill is tailor-made for getting into mussels and pulling out the meat. 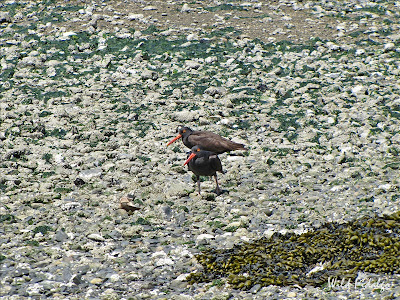 There was a pair of birds here, and males and females look alike.  Pairs are monogamous and non-migratory.  They will defend their territories and may inhabit them year-around. 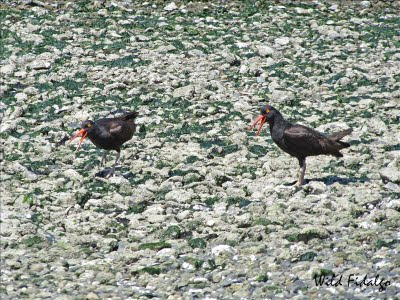 I watched this pair perform a brief, stylized display that resembled a tiff.  They made loud, whistling calls as they strutted around each other.  This is the breeding and nesting season for this area.

For a bird that prefers isolation, they are remarkably unwary and laid back. This is only my second encounter with the species, but on both occasions, they revealed this calm demeanor. 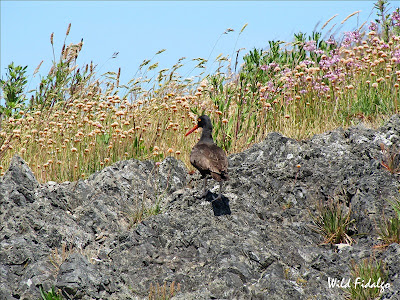 As I continued watching, one bird settled on an outcrop to rest (top photo).  The other climbed up the stone bank of the island, possibly to a nest.  What a beautiful spot they chose, a home surrounded by a field of wildflowers.  I wondered if there were eggs there. 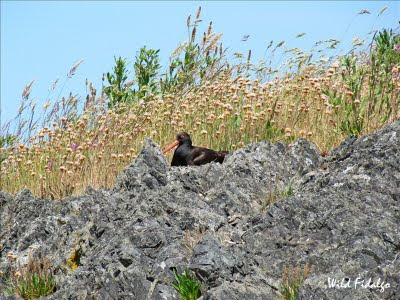