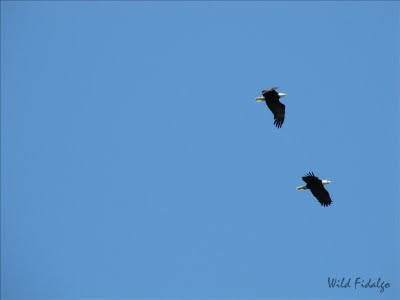 This summer, Bald Eagles (Haliaeetus leucocephalus) have been making regular visits to the hunting perches in my yard.  They don't appear to be hunting.  Mostly, they just seem to be loafing.  I wonder if they come to take a break from the kids.

I always know when they are around.  They announce their arrivals with their chattering calls.  "Hey Dave, come out and take our picture." 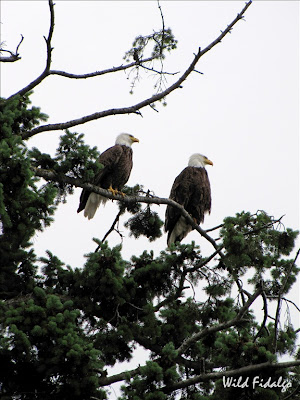 Recently, they have been coming in pairs.  This is George and Martha, I believe.  Since Bald Eagle females are larger than the males, Martha would be on the right.

Did you know that "bald" in their name does not mean hairless.  It comes from Middle English ballede referring to white on the heads of animals, as blazes on horses.  The Indo-European base word is bhel, "white," which comes into Old German as ballo and Russian as belo.  "Piebald" is a related word.  The scientific name literally means "white-headed" (leucocephalus) "sea eagle" (Haliaeetus). 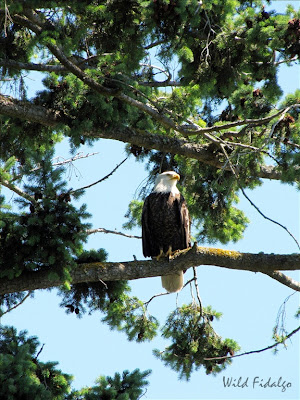 The Pacific Northwest is one of the remaining Bald Eagle breeding areas in North America.  The conservation status of the Bald Eagle has been downgraded from "endangered" to "threatened" by the U.S. Fish and Wildlife service.  The Washington Department of Fish and Wildlife also classifies them "threatened."  According to Birdweb, there are currently more than 550 active Bald Eagle nests in Washington.  This includes some within the city limits of Seattle. 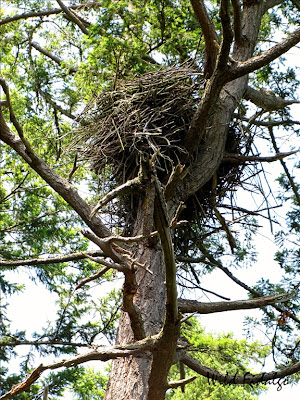 High in a Douglas Fir, this is a nearby nest or "aerie" which is not being occupied this season.  Eagles are monogamous, solitary nesters, but a pair might have two or three nests in their territory.  If there is too much disturbance at one site, for example, they can move to another.  It is thought that another reason to switch sites is to allow idle nests to clean themselves of parasites.

The birds will add material to their nests every year.  Over time, they can become huge, sometimes weighing a ton or more.  Sticks form the basic structure.  The nests are lined with softer materials such as leaves, grass, pine needles and moss.

Neil Armstrong from Apollo 11:  "Houston, Tranquility Base here.  The Eagle has landed."

In 1969, I watched the moon landing on television.  Today was the final launch of the shuttle program.  Apparently there is nothing to replace it at the moment.  From the greatest achievement in technology to this.  It is a very sad day in history.
Hawks and Eagles
Location: Kiket Island Rd, La Conner, WA 98257, USA