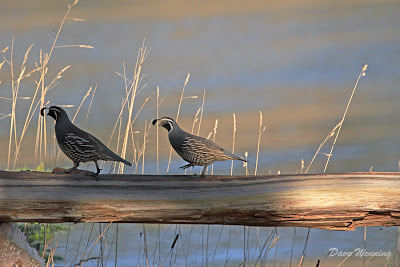 When I moved into my house, the Quail were the first birds I noticed in the yard.  Six or seven broods, chortling parents and young together, would move across the ground on foraging expeditions.  One of the males would perch on something high and serve as a lookout.  His attention to duty was steadfast.  The group would move along quickly, never lingering in any one spot.  The first time I saw this, I thought the ground was rippling.  It was the visual effect of dozens of tiny scurrying chicks.


There is a reason these shy birds use a lookout and rarely stop moving while out in the open.  They are the "wildebeests" of the bird world.  By that I mean they are a favorite food source for predators.  Every couple of weeks or so I find a pile of gray feathers on the lawn.  I know the resident Cooper's Hawk or a Peregrine bagged another meal.  I actually witnessed this event in action, which served to fill in the details of the mysterious feather piles.  Like the herds of Africa, the practice of communal brooding is another defense against predators.


I rarely see them out and about in the yard during fall and winter.  I do hear them calling from their cover in dense shrubbery.  Apparently this is reassuring and helps to keep the groups together.  It was a surprise to come upon these birds on an early winter excursion in the State Park.  It is necessary to work fast catching photos.  When they see a guy with a camera, they skedaddle like celebrities running from paparazzi.

If you are planning a wildlife garden and wish to attract California Quail, give them cover of dense shrubbery and mixed borders that imitate the early successional habitat they like.  A source of water is also necessary.  If you have a patch of dry ground they will enjoy a dust bath and will rest in the sun if they feel comfortable in such a spot.  A little birdseed scattered on the ground is also appreciated. 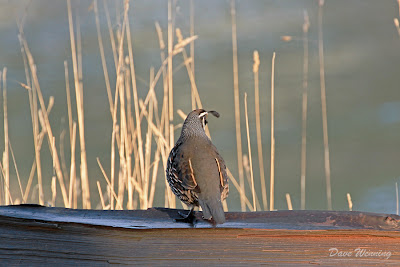