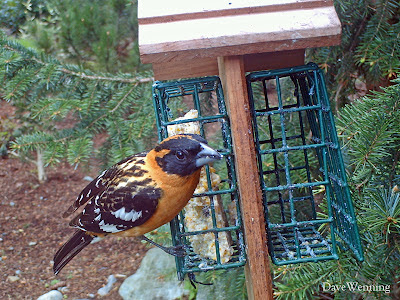 The Black-headed Grosbeak (Pheucticus melanocephalus) in the Cardinal family is one of our summer birds.  They breed in all of the western U.S. states and southern British Columbia, but spend their winters in Mexico.  Males are handsome devils, with orange breast and neck, black mask and a tortoise shell pattern on the wings and back. 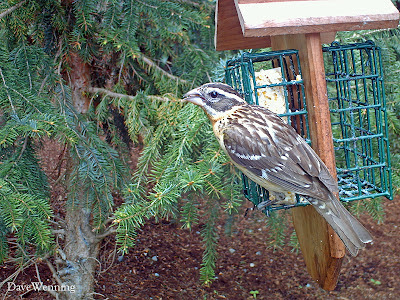 Melanocephalus literally means "black headed" in Greek, but this refers specifically to the male's coloring.  Female and juvenile Black-headed Grosbeaks have paler buff undersides and white eyebrow stripes.  A thick bill is designed for cracking open seeds. They also like insects, spiders, fruits and berries.  They are one of the few birds that can feed on the Monarch Butterfly in their Mexican wintering grounds.  Monarchs accumulate noxious chemicals in their bodies from their milkweed diet that most birds avoid.


Locally, these birds can be attracted to feeders with suet, safflower seed, apple slices and peanuts.  They prefer a forest edge habitat that includes broad-leaved trees and shrubs.  I never see them venturing into open areas.  To make them feel at ease, place feeders near cover where they can easily escape.  Above, a female feeds suet to a juvenile.  I often see baby birds of all sorts begging from adults at the feeders.  In the right photo, one male is flaring his tail.  Is this a confrontation display towards the other male? 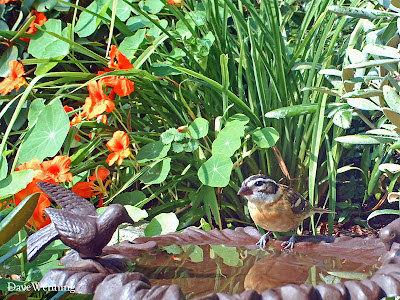 Black-headed Grosbeaks also prefer habitat near lakes, streams and wetlands.  Be sure to provide sources of water in you wildlife garden.  Even a small birdbath seems to attract them.


These juveniles, born this season, are already enjoying a good bath on a warm summer day.  With a bit of yellow under-wing showing in the right photo, I think this could be a young male.  If they are nesting in the yard, they are keeping it a secret from me.  The Red Alders in the small, wooded wetland across the road may be more to their liking. 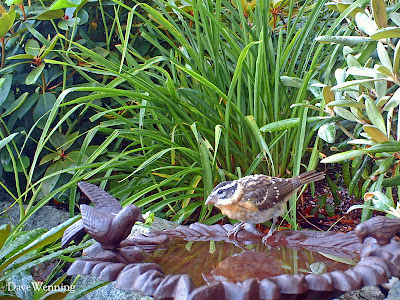 A scruffy look and incomplete wing feathers are signs of a juvenile bird.  I am seeing mostly juveniles at the BirdCam birdbath station. 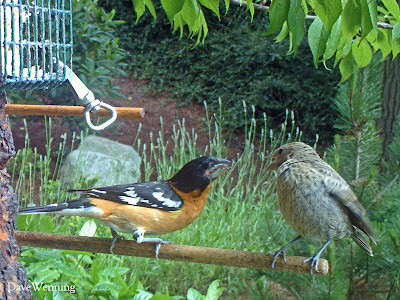 Is this another confrontation?  This time I think the other bird is a baby Starling.  It's something about the bill, but I could be wrong.  It doesn't surprise me to see aggression, even in a baby Starling.  No, I don't like them.

UPDATE:  Dan Huber suggests the Grosbeak is feeding a Cowbird chick in the photo.  This is interesting because it is well known that Cowbirds don't raise their own young.  They lay their eggs in other birds' nests.  This makes the photo more fascinating for me.  I do see Brown-headed Cowbirds in the yard, but not often, and I have never seen a youngster.  I see them more frequently driving to work through the open Skagit Valley farm lands.  Thank you Dan for this information. 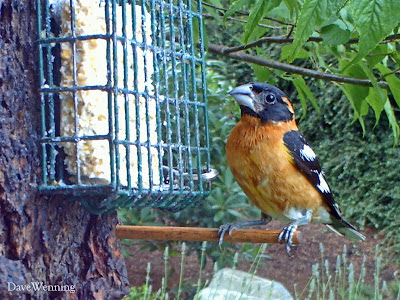 Bold and colorful, this male Black-headed Grosbeak, photographed in July, is in prime breeding condition.  These large, stocky finch-like birds are some of the rewards for maintaining a wildlife garden.