Narcissus at the BirdCam 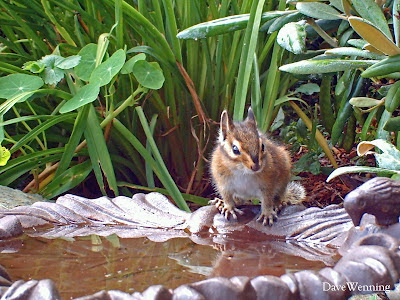 The BirdCam catches a Townsend's Chipmunk (Tamias townsendii) getting a drink at the birdbath station.  He pauses to admire his reflection in the water evoking the story of Narcissus from Greek Mythology.

When Narcissus saw his reflection in a pool, he fell in love with it.  He lingered there admiring his own image until he died. 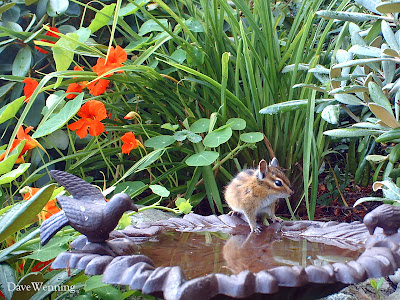 My little friend is not as vain as the guy in the Greek legend, but he seems to enjoy having his picture taken.  Their photos have been captured at the BirdCam stations several times.  Townsend's Chipmunks are year-around residents on South Fidalgo and are active through the winter here.  Where winters are colder, they will hibernate in their underground burrows.

Oregon State University provides some tips for attracting them to the wildlife garden.  Give them a source of water, some brush piles, rock piles, rotten logs and dense plantings for cover.  They enjoy berries, Salal fruits, conifer seeds, maple seeds and the same high quality seeds we provide in bird feeders.  Because of their habit of burying seeds, they are effective tree planters.  These charming visitors are fearless little guys.  If they feel safe, they will come right up to people to get what they want. 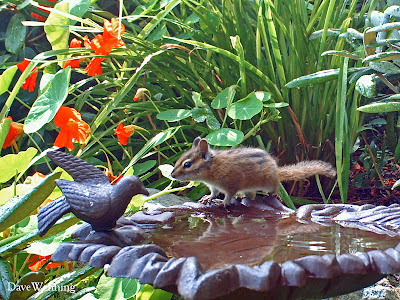 Townsend's Chipmunks were first described by Europeans during the Lewis and Clark Expedition.  The species is named for John Kirk Townsend, a nineteenth century ornithologist and wildlife explorer.  There are several species that bear his name including Townsend's Mole and Townsend's Warbler.
BirdCam Mammals
Location: Gibralter Rd, Anacortes, WA 98221, USA