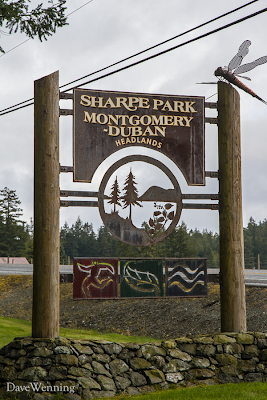 Today, I visited Skagit County's Sharpe Park for the first time.  I only recently discovered that it was there.  I found a network of old growth forest trails I can spend many hours exploring.  The headlands offer terrific views of the San Juan Islands across Rosario Strait.  I also found a large pond and wetland, tailor-made for wildlife.  The park is located on the west side of Fidalgo Island off Rosario Road. 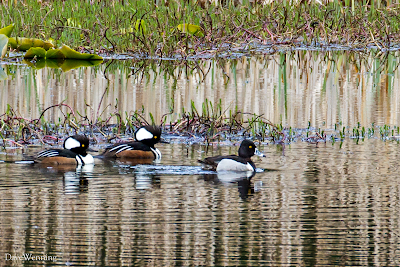 The pond was my first stop and right off the bat I spotted two handsome male Hooded Mergansers (Lophodytes cuculattus) in the company of a male Ring-necked Duck (Aythaya collaris).  The peaked crown and a more decorated bill distinguish the latter from either the Greater or Lesser Scaup.  I saw no females of either species. 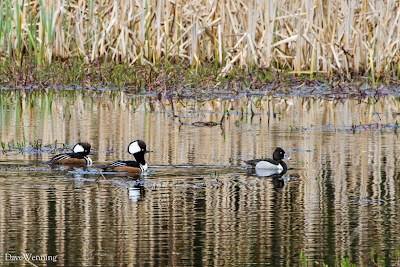 The Hooded Mergansers were eager to display their crests.  This makes me think there were hens somewhere in the area.  Like Wood Ducks, they like to nest in tree cavities near water.  I spotted at least two large nest boxes at the edge of the pond.  These may have been put up for them.  They are year-around residents on Fidalgo Island. 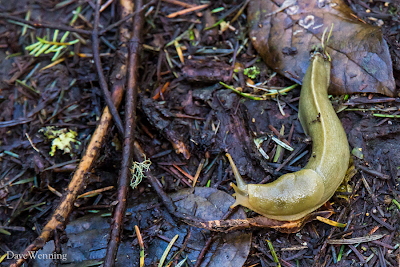 We have had a lot of rain over the last few days.  Because of this, I expected to see one of our local mascots, the Banana Slug (Ariolimax columbianus).  Sure enough, this fellow was right on the trail, deep in the woods.  So far, my theory that Fidalgo Island Banana Slugs have no spots is proving to be true.  On Whidbey Island, just across Deception Pass, all the Banana Slugs seem to be spotted. 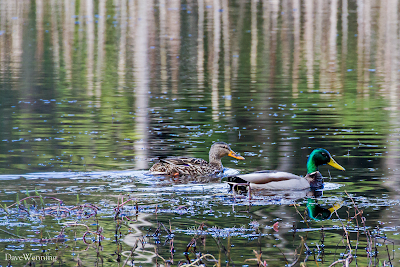 After exploring some of the trails in the woods, I circled back to the pond again.  This time, I spotted a pair of Mallards (Anas platyrhynchos).  They are probably our most common and familiar ducks locally.  During the winter, gatherings of a thousand or more may be seen in the fields of the Skagit Valley along my commute to work.  They like to nest near water, but it may be up to a mile away.  I suspect this pair will be guiding up to fourteen ducklings around the pond by summer.  Platyrhynchos, incidentally, means flat bill.  With the exception of Muscovy Ducks, all domestic ducks can trace their genetic ancestry to Mallards.

Out in the Cattail beds, Red-winged Blackbirds males were singing to claim their territories.  I could also hear Spotted Towhees and Chickadee-dee-dees.  Pileated Woodpeckers were calling all around me and I found their recent excavation work in a dead snag.  The evidence of new shavings at the base of the trunk gave it away.

I also heard a ratcheting-buzzing call I can't identify.  I have heard that same call in the Skagit River Delta.  Perhaps someone can help me out with that.  It always comes from dense plant growth.  I anticipate I will be making many return visits to Sharpe Park to see what else it has to offer.  Maybe I will finally get that call identified.