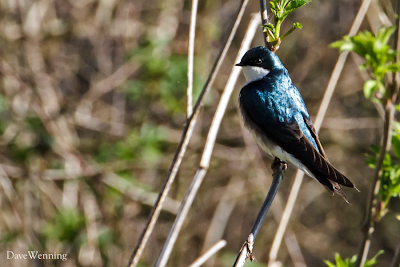 Last week, I was pleased to see the Tree Swallows (Tachycineta bicolor) had returned to my favorite Fir Island nature site.  This is the Spur Dike Trail at Wiley Slough in the Headquarters Unit of the Skagit Wildlife Area.  The dike provides easy, dry ground access deep into the wetlands of the Skagit River delta.  Tree Swallows migrate north from their tropical wintering areas earlier than any other swallow.

The scientific binomial Tachycineta bicolor literally means "fast mover with two colors."  Tree Swallows are indeed fast movers.  They typically feed by catching insects on the fly, soaring and swooping at lightning speed.  Unlike eagles and gulls which like to perch and pose for photos, these swift birds are difficult to catch with a camera.  They might land and perch for only a moment, then dash off on the fly again to the tune of their high-pitched calls.

Fortunately, one bird decided to stop and rest a minute.  Although the lighting was not the best, this gave me a chance to get some photos. 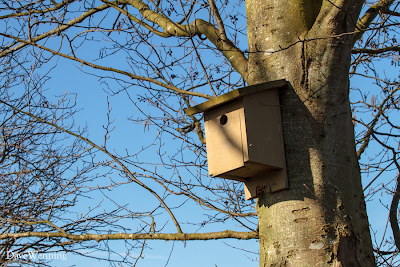 The Skagit delta provides the ideal habitat for Tree Swallows.  They like to nest in open areas near water where there are standing dead trees for nesting according to iBird.

Tree Swallows are cavity nesters.  They use natural crevices and the chambers created by woodpeckers and other borers.  They also readily take to nest boxes provided by humans.  Someone has put up more than 30 nest boxes along the Spur Dike Trail.  A few more have been added this spring.  I presume the Washington Department of Fish and Wildlife who manages the site is responsible for the nest boxes and I appreciate that. 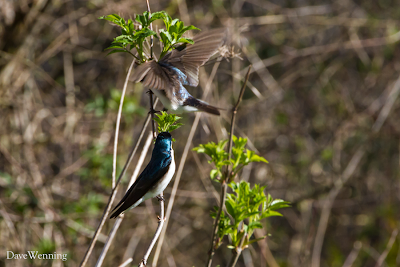 Males arrive at the nesting grounds ahead of the females to establish territories.  While I was watching this fellow, his mate decided to join him.

I found it confusing to read that Tree Swallows were described as both monogamous and polygamous by different sources.  Apparently, they form stable pair bonds, at least for a breeding cycle.  The offspring in a particular nest, however, may have different fathers.  Polyandry is the specific term for this.  The same behavior has been observed in Eastern Bluebirds.  This is a strategy that insures reproductive success and genetic variation within colonies.

A group of Tree Swallows is called a "stand."  With several dozen pairs, the Spur Dike Trail at Wiley Sough is a major stand indeed. 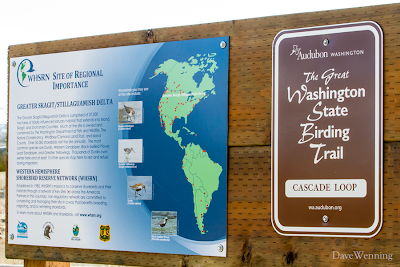 This new sign was recently erected at the dike.  The site is on the Great Washington State Birding Trail.  The sign also reveals it is part of the Greater Skagit/Stillaguamish Delta, a site of regional importance in the Western Hemisphere Shorebird Reserve Network.

You can find the Headquarters Unit at the end of Wiley Road off Fir Island Road in Skagit County, Washington.  If you come up for the tulips this month and want to escape the tulip tourists, this might be a nice side trip.  It would definitely be a respite from the crowds.  Tulip tourists are typically not the nature trail types.  Midweek is the best time.  Don't forget to bring your Washington Discover Pass.