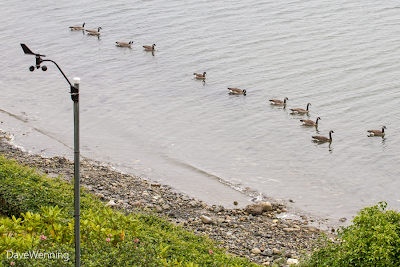 Migrating geese are a symbol of autumn and the local migration has begun.  Every year, Canada Geese (Branta canadensis) pass by my house during September and October.  Their visits are announced by rich and musical calls.  They are always flying or swimming in the same direction, westward along the shoreline towards Deception Pass.  I assume they are heading out to meet their companions on the Pacific Flyway.

In the photo, a Glaucous-winged Gull is keeping watch at the water's edge.  The mottled winter coloring of the head and neck is already starting to appear.

Sometimes, the geese will stop for a rest on the beach in front of my house.  A small stream that drains the wetland behind me provides a drink of fresh water and an algae snack.  Then after a nap, they will continue on their way. 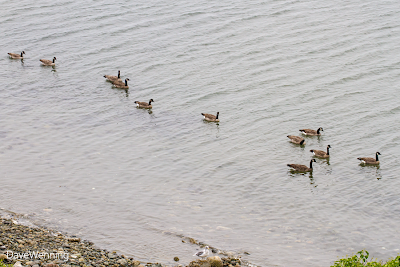 I have come to look forward to this annual event.  Some people despise these birds.  They can become pests in public parks and golf courses.  Cranberry Lake in Deception Pass State Park was closed for a time due to fecal coliform bacteria left behind by resident geese.  My visitors, however, have never worn out their welcome.

Many species of birds are migrating this time of the year.  If you live along a flyway, check your local weather radar.  On a clear, rain-free night, the echoes you see likely reveal the paths of migrating birds.

I have read that if a member of the migrating flock of Canada Geese is injured, a companion will stay behind with the injured bird.  They will remain together until the injured bird can either rejoin the flock or dies.  I like that.
Geese Gulls Seasons
Location: Gibralter Rd, Anacortes, WA USA