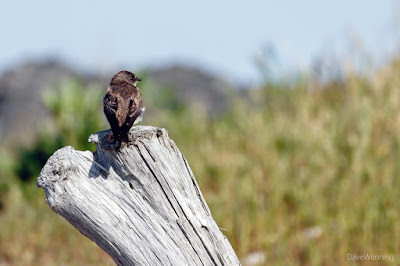 Last Tuesday I went hiking and picture-taking at the Kukutali Preserve.  I headed out to the far end of the beach off Flagstaff Island to check on the Black Oystercatchers.  I noticed a pair of brown birds sticking together on the root of a large driftwood tree.  They would fly up occasionally, then return to their perches on the root.  When they flew, they resembled swallows, but when perching, I didn't recognize what they were.

They steadfastly kept their backs turned to me.  This was frustrating my efforts to get a decent photo.  One of them held possible nesting material in its beak.  The story was emerging.  They were building a nest nearby, but did not want to reveal its location to me.  For as long as I stayed on the beach, they would stick to their perches on that root with their backs turned. 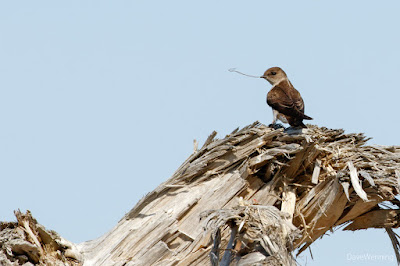 I got a few shots (of their backs) then left so as not to disturb them any more.  When I got home, I took a good look at the photos to try and ID them.  I discovered they were Northern Rough-winged Swallows (Stelgidopterix serripennis).  A Twitter friend confirmed the ID.  Not only had I never seen one before, I had never heard of them.  This made it an exciting first for me.

The genus name means "scraper wing" and the species name translates to "sawtooth feather."  Apparently this is an important characteristic that also appears in the common name as "rough-winged."

To my assessment, the sootiness around the eye gives them a kind of woozy, bleary-eyed look as if suffering a hangover.  Their energetic, swallowy behavior, however, dispells any notion of that. 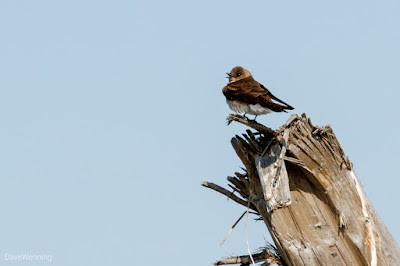 I learned they are cavity nesters that prefer to live near water.  They build their nests in burrows or natural cavities in banks, but are not above using crevices in bridges, culverts or other masonry close to water.  Like other swallows, they feed on insects plucked from the air or off the water surface.

Their distribution is patchy.  They can be found wherever there are suitable nesting cavities available.  This may explain why I had never seen one before.  I had just never been in the right place. 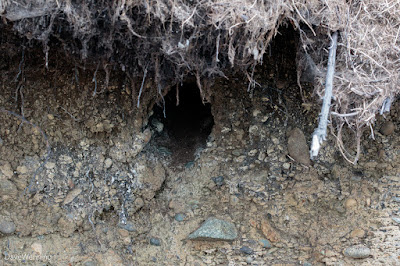 Armed with new knowledge, I returned to the Preserve yesterday.  I headed down the beach to see if this pair was still around.  Indeed, they were.

Behind the driftwood there is a low, exposed bank at the edge of the island.  While I stood at a distance, the swallows would soar past the bank repeatedly, then fly off, return and fly off again.  I stayed back not wanting to disturb them unduly.  Then they disappeared for a while.  I went in for a look and found what could be their nest site just under the vegetation line.  I took a couple of pictures then quickly left the beach.  Their story was now complete.

On Tuesday, I did get some pictures of the Black Oystercatchers, but yesterday, they were nowhere to be seen.  Once again, I went hiking to see one thing, and ended up finding something else even more interesting.  It's amazing how often this happens.

UPDATE:  On Memorial Day I was back on the beach south of Flagstaff Island.  I was pleased to find the swallows still flying around their nest site.  I was concerned that getting close for a photo might have scared them off.  Luckily, that did not happen.