From the Deer Trail

Nature Blog Scavenger Hunt:  Wild Fidalgo is participating in scavenger hunt featuring Pacific Northwest nature blogs.  Patricia K. Lichen (Kidnapping the Lorax) will be hosting the event.  Answer questions from the featured blogs and you could win a copy of Kidnapping the Lorax.

When I bought this property, there was a trail that ran from the road down to the beach.  It provided easy access through the woods to inspect the lot.  At the time, I wondered who was using this trail and if this would be a problem in the future.  It turned out to be a deer trail and after clearing, building, landscaping and nearly 24 years, the deer still follow the exact same route to the beach.  I assume they make the trek to get a little salt.

As they move through the yard, they do like to snack on garden plants.  They nibble as they continue to move along, so they don't do a lot of damage in any one spot.  They are particularly fond of wild and Rugosa Roses, Pacific Ninebark and Dogwood.  It was necessary to pot up a Pyrachantha and move it to the patio to rescue it.  They do help to keep the wild rose from encroaching the path to the beach.  A couple of winters ago, they took to sleeping in my back lawn.  They did quite a bit of damage to the grass, but it recovered quickly in the spring. 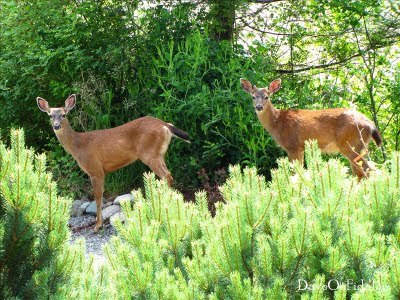 These deer are noticeably smaller than those I have seen on the mainland.  Similarly, the deer on Lopez Island in the San Juans are even smaller and could be described as "miniatures."  These may be examples of insular dwarfism.  Large animals living on islands can become smaller than their mainland counterparts over time.  A possible cause could be the more limited food and water supplies found on islands.  Keep in mind, starving an animal does not make it smaller.  Under the tenets of natural selection, genetically smaller offspring are more likely to survive and reproduce in an environment of scarce resources.  Smallness thus becomes an adaptation to the island environment.  Eventually, these smaller deer could be classified as a new species.  The Origin of Species may be unfolding before our eyes.

The deer do have predators here.   About five years ago I witnessed a pair of coyotes trying to take down a doe on the beach.  Her response was to move out into the water belly deep.  The coyotes could not pursue and bite her in the water and she survived the encounter.  On dry land away from the beach, I am sure she would have been toast.

I believe this pair are brother and sister and a bit more than two years old.  I remember them as tiny, wobbly newborn fawns when they first appeared with their mother.  They continued to accompany her as yearlings.  Now it looks like they are on their own, but still sticking together.  Click on the photo to enlarge it and notice the antler buds growing on the young gentleman on the right.  It's been a pleasure watching this pair grow to adulthood.  Living on the deer trail has provided another episode from the story of life on South Fidalgo.
Mammals
Location: Fidalgo Island, Washington, USA