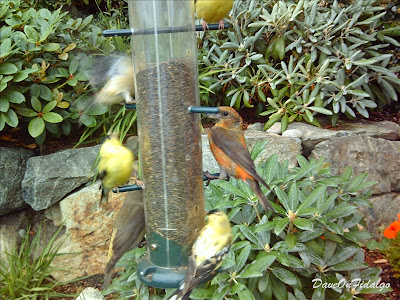 This is a Birdcam photo that would normally have been discarded due to blurred images.  The orange-tinged bird on the right, however, provided a reason to reconsider.  I have had nyjer seed set up at Birdcam One in order to catch some shots of Goldfinches.  I have gotten some nice ones and will present those here a bit later.  This bird is a Red Crossbill (Loxia curvirostra) and this photo marks only the second time I have seen one in the yard.  Even though his head is partly obscured by the perch, the occasion is important enough to present it here.  If you look closely, you will see how his upper bill curves over the left side of the lower bill.  Both bill tips curve past each other giving the bird its name.

The first time I saw a Red Crossbill in the yard was about twelve years ago.  This was a brilliant brick-red male with dark brown wings.  He spent a good twenty minutes preening on a post.  The bird in the photo is probably a first-year male with immature plumage.  Females are greenish yellow.  Is the partially hidden bird on the lower left of the feeder a female Red Crossbill?  It is certainly not a Goldfinch.

These are common birds in western Washington, but according to Birdweb, this can be highly variable from one spot to another.  My yard provides ideal habitat, mature, cone-bearing conifers.  That bill is useful for only one purpose:  extracting seeds from fir and pine cones and opening them.  Apparently the size and shape of the bill will vary according to the food sources in a given area.  At feeders, they also like sunflower and safflower seeds.  Since there are apparently Crossbills in the neighborhood, I have now set up Birdcam One with a mixture of the two.  I left the nyjer feeder nearby.  The challenge will be to attract Crossbills and other desirable birds, before the Starlings and squirrels notice the new fare.  Wish me luck.