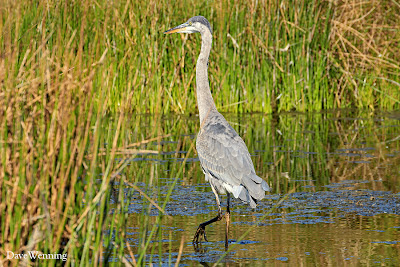 I drove across Deception Pass to Whidbey Island this morning to see if I could spot any wildlife.  My first stop was Ala Spit where I spotted a "parcel" of Black Oystercatchers, six in all.  The sun was right behind them which ruled out a decent photo.  They were not going to let me get close, either.

The next stop was West Beach in Deception Pass State Park.  I took a stroll around the Sand Dunes trail.  As usual there were a lot of gulls and crows, but not much else going on.  Even my reliable old friend the Douglas Squirrel, the "Mayor of West Beach,"  was nowhere to be seen. 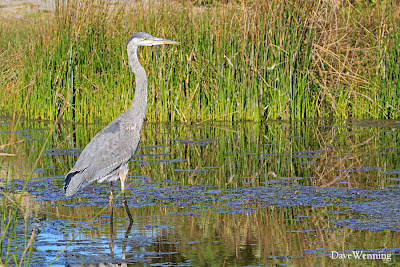 Heading back to the parking lot, I spotted something moving behind the reeds growing at the edge of Cranberry Lake.  I practically walked right into a Great Blue Heron (Ardea herodias) patrolling the shallows at the edge of the lake.  They have the habit of freezing in place when alarmed.  This makes them great photo subjects. 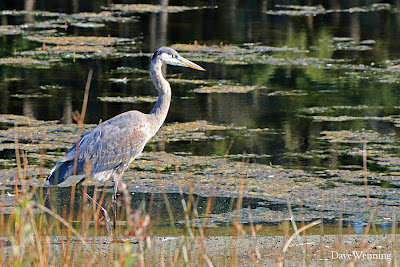 I was amazed how close the heron was allowing me to approach.  No doubt, this State Park bird has become accustomed to having people around.  I had the same experience at the marina in downtown Anacortes.  I have never gotten this close to the herons on the beach at home.

The binomial carries a mystery for me.  Why was this bird given the name herodias?  Herodias was the second wife of Herod Antipas and the mother of Salome.  I don't get the connection.  I would enjoy hearing from anyone who knows.

When I backed off a bit, he continued his patrol along the edge of the lake.  I was pleased to have met this fellow.  He saved the day for a hopeful photographer.