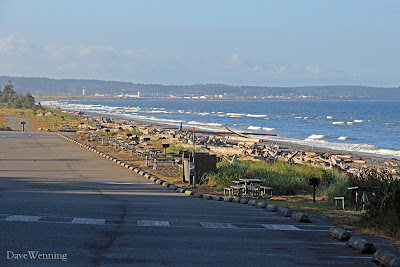 After a month and a day with no measurable rainfall, it finally rained last night.  My weather station recorded 0.07 inch (1.8 mm).  Some are surprised to learn that during July and August, the Pacific Northwest is one of the driest places in the country.  My garden is testament.

After early morning overcast, the skies quickly cleared.  It looked like a good day to check out Deception Pass State Park nearby.  Now that school is in session and most of the tourists are gone, may I declare that the park is all mine again?

I crossed the Deception Pass Bridge and headed over to West Beach and Cranberry Lake on Whidbey Island.  I found it breezy with surf rolling in off the Strait of Juan de Fuca, an aftermath of last night's rain system. 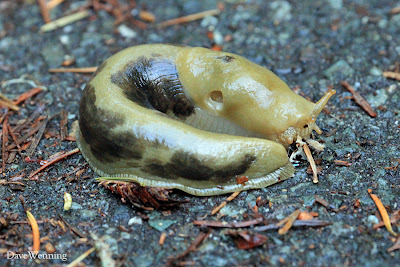 I set off on the Sand Dunes Interpretive Trail.  As usual, a couple dozen gulls were in Cranberry Lake for their morning swim.  Northwestern Crows were patrolling the outer dunes.  There were no Canada Geese this day, but their legacy remains.  Their, uh, remains have forced the closure of Cranberry Lake to swimming by humans.  Today I found the most interesting wildlife was in the dark, shady spots of the dune forest next to the lake. 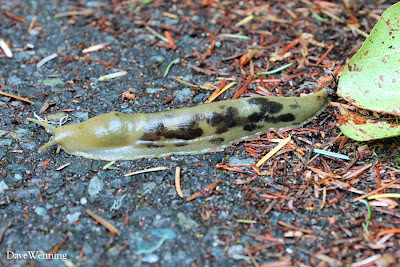 The paved pathway through the forest was alive with our native Banana Slugs (Ariolimax columbianus).  Even here, I had never seen so many before.  No doubt they were lured out of the vegetation of the forest floor by last night's rain. 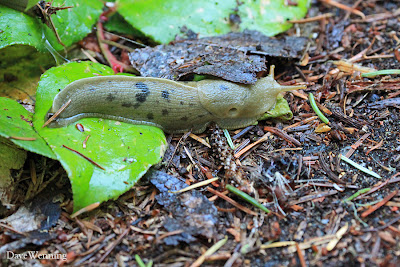 Banana Slugs are terrestrial gastropod mollusks related to snails, but they lack an external shell.  They are cousins to oysters, nudibranchs and octopuses.  They have a lung and breath air through a hole in the side of their mantle called a pneumostome.  You can see it in the photo above.  It always seems to be on the right side. 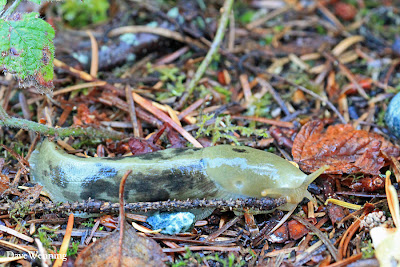 Slugs have two pairs of tentacles on the head, upper and lower.  There are light sensing eye spots at the tips.  These do not provide vision as we think of it.  Vision is not an important sense for an animal that lives in shady darkness.  The tentacles also contain olfactory cells for smelling which is their most critical sense for finding food.  They have no sense of hearing, but seem to be very perceptive to the vibrations of human footsteps.

Gastropod reproduction is hermaphroditic.  Each animal possesses both male and female reproductive organs.  You can refer to them as he or she since they are both.  Pheromones in the slime attract other slugs for mating which involves a mutual exchange of sperm.  Self-fertilization by a single animal is also practiced. 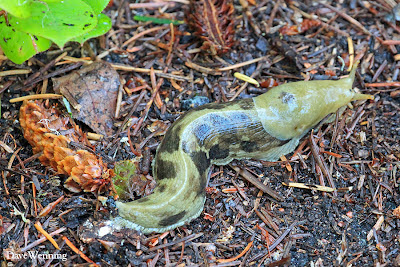 The Banana Slug is our only native slug.  Those red, gray and black slugs which are garden pests are all introduced, invasive species from Europe.

The Banana Slug is a valuable detritivore.  This means it consumes plant and animal waste material and converts it into organic soil.  They are an important part of the ecosystem.  Even in the garden, they will more likely be found chewing up fir needles which have dropped to the ground, rather than your petunias.  Do what you wish with the garden pests, but If you find a Banana Slug, give it your protection.  It is one of the good guys. 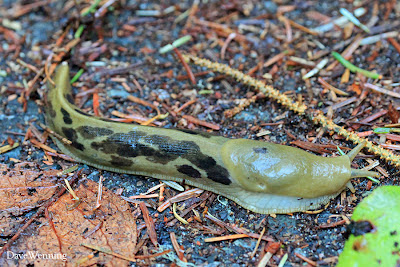 A slow-moving, defenseless creature relies on stealth and camouflage for protection.  Even on the path, they are almost impossible to spot in the forest shade and leaf litter.  Where I grew up on the west side of Puget Sound, we had the big, bright yellow Banana Slugs.  Again, these were well camouflaged in the leaf litter and dappled sunlight of the forest floor.

I wonder if the black spots are unique in each individual, like fingerprints.

There are a few animals which eat slugs.  I have seen a garter snake eating a black slug in my garden.  A greater threat to the native slugs, however, are the introduced European species through competition and predation. 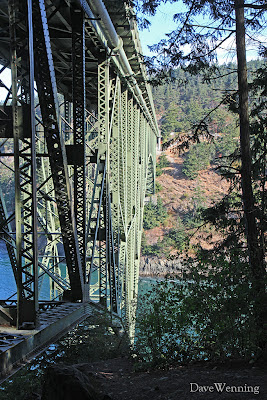 Deception Pass State Park is named for the gorge and waterway between Whidbey and Fidalgo Islands.  Sections of the park are on both sides.  The iconic Deception Pass Bridge connects the two sections and will be my route home to Fidalgo Island on the opposite side in the photo.  It was a very pleasant morning visiting the Banana Slugs of West Beach.